New name, new sponsor but a race everyone is still desperate to win 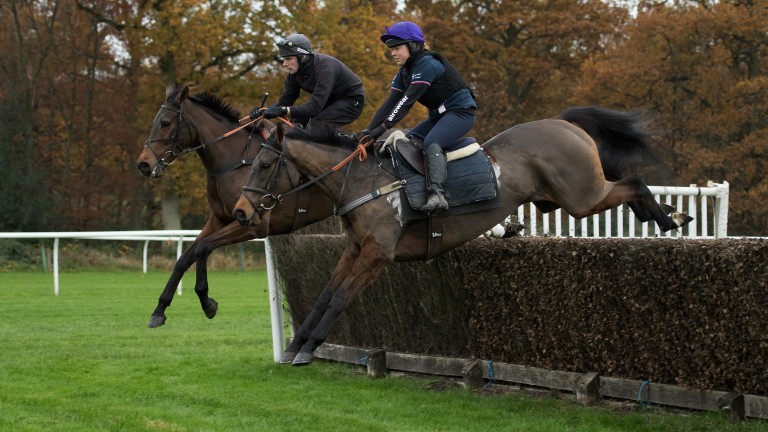 It is fair to say Nicky Henderson owes Mike Dillon a gratitude of debt for his Hennessy Gold Cup victory with Trabolgan – the champion trainer has since gone on to add two more – but rather than repay the Ladbrokes PR man, the champion trainer intends to benefit from his generosity once again in Newbury's most famous race next week.

The race for which Henderson risked a telling-off by skipping school to watch immortal chasers Mill House and Arkle run in has a new name and a bolstered purse with £250,000 – up £50,000 from 12 months ago – on offer in what is now the Ladbrokes Trophy.

Successful with Trabolgan, Bobs Worth and Triolo D'Alene, the Lambourn trainer is eyeing a fourth strike in the prestigious handicap with Whisper and Vyta Du Roc, but will likely aim 25-1 contender OO Seven at a graduation chase at Haydock on Saturday.

"Newbury means a lot. It's been my local track since the day I first went racing and got caught here escaping from school. It's the Newbury showpiece and of course we want to win it," Henderson said, trying his best to avoid mentioning the H word in the name game of race sponsorship; he might not recall saddling Tower Of Allen to finish second in the Papa John's Pizza Newbury Novices' Hurdle at the track last year.

Margaritas, not Margheritas, may be toasted at Seven Barrows if either of his pair triumph and the layers think it is more likely to be Whisper who will get Henderson doing the shouting as he's a 12-1 shot with his stablemate available at 25-1.

Henderson rates both, but likes the angle of a smart novice chaser being pitched into one of the most ferocious races in the jumps calendar.

It was a route that served him well with Trabolgan and Bobs Worth, RSA winners just like Whisper would have been had it not been for a certain Might Bite.

"Second-season novices have a good record in this, but it's not as if he's that young though," Henderson added of the nine-year-old.

"It's been a good race for the six and seven-year-olds – the Might Bites – and actually it was Mike years and years ago who asked where I was going to go with Trabolgan.

"He said, 'You've got to look at the Hennessy – I promise you he'll be so well in.' I said we'd be top weight, but he said, 'It doesn't matter, you've got to run him'. And he was dead right.

"The second-season novices do have a good record in it, like Bobs Worth. Whisper nearly did win the RSA and is as near to the profile as we've mentioned, but he's not quite as young as they were."

Neither of Henderson's arrows are working at the track, but around 250 annual members are treated to the sight of 2015 Cheltenham Gold Cup hero Coneygree schooling.

Pulled up in the Charlie Hall last time, he would be a popular winner of the race his half-brother Carruthers captured in 2011.

"It would be lovely to win it again," said Sara Bradstock, wife of trainer Mark.

"He's running off 165, which is not a Gold Cup weight, so I don't think he has to be better than his win at Cheltenham to win this. I totally believe in him and he feels incredible; the engine is still very much there."

Also in action are the Harry Fry-trained ante-post fancy American, a seven-year-old second-season novice chaser who looks one for the trends players, as well and Missed Approach, who leaves trainer Warren Greatrex "chuffed" after galloping with three other Uplands inmates.

"The track is made for him," said Greatrex, who had his challenger down as a Hennessy horse long before Ladbrokes came on board.

The race may have a fresh look, but it remains the fiercely competitive, high-class contest it always was.

FIRST PUBLISHED 6:26PM, NOV 21 2017
Second-season novices have a good record in this, but it's not as if he's that young though