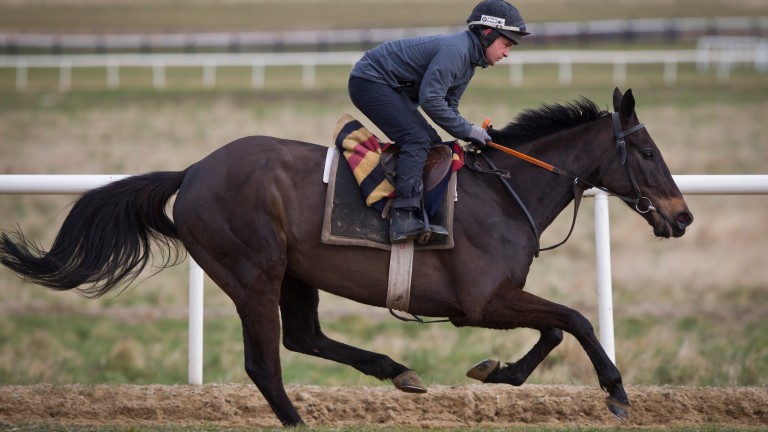 Thunder And Roses: could continue his love-affair with Fairyhouse in the 3m1f rated chase on Saturday
Patrick McCann
1 of 1
By Tony O'Hehir 6:00PM, NOV 5 2016

A field of 16 for this valuable event includes five horses who have already won 'Nationals' of some description.

The quintet includes the last two winners of the Irish Grand National – Thunder And Roses (2015) and Rogue Angel (2016), who are among five runners from Gigginstown House Stud.

Rogue Angel also won last year's Kerry National while Wrath Of Titans, one of three runners for Gordon Elliott and also on the Gigginstown team, won the Listowel event in September under today's rider Lisa O'Neill.

Federici, who represents Enda Bolger, won the Ulster National at Downpatrick in March, while Raz De Maree won this event four years ago when trained by the late Dessie Hughes.

Thunder And Roses will be having his first run since April and his first for Mouse Morris, who also trains topweight Rogue Angel.

New Kid In Town, who will be making his handicap debut, was a course winner over 2m4f on his most recent start last month and represents Willie Mullins and Ruby Walsh.

Other last-time winners in the line-up are the Gavin Cromwell-trained As De Pique, who beat stablemate Raz De Maree over 3m1f at Gowran Park last month, and Undressed, trained by Michael Hourigan, who was successful at Limerick four weeks ago.

Noel Meade, successful with Tulsa Jack a year ago and previously with Mattock Ranger in 2007, is represented by Tom Horn and Thomond.

Gordon Elliott, trainer of Wrath Of Titans, Akorakor and Captain Von Trappe
Wrath Of Titans will like the trip and is in good nick. Lisa [O'Neill] claims 7lb and that will help. He's got a decent chance. Captain Von Trappe ran quite well against Monksland last time and is in good order. He should give a good account. Akorakor is returning from a long absence and should come on for the run.

Enda Bolger, trainer of Federici
He's in good form and had a nice confidence-booster at Punchestown last time after things didn't work at all for him in the Munster National. We're hoping to get a share of the prize-money.

Gavin Cromwell, trainer of Raz De Maree and As De Pique
Raz De Maree is absolutely bouncing and has come on nicely since his last run. As De Pique is in great nick. I don't see the trip being a problem for him and he'll love the ground. They both have chances and I find it hard to separate them.

Willie Mullins, trainer of New Kid In Town
He has a lovely racing weight (10st 3lb) and it's not a weight Ruby does that often. He's in good form for his first handicap and has to have a good chance. I think he'll handle the trip.

Eugene O'Sullivan, trainer of A Decent Excuse
He's in great form. This could be the end of his season and he'll have the ground in his favour. We're looking forward to a big run.

Michael Hourigan, trainer of Undressed
I've been happy with him since his Limerick win. The trip shouldn't be a problem and he's capable of a big run off 9st 10lb.

FIRST PUBLISHED 6:00PM, NOV 5 2016
He has a lovely racing weight (10st 3lb) and it's not a weight Ruby does that often. He's in good form for his first handicap and has to have a good chance