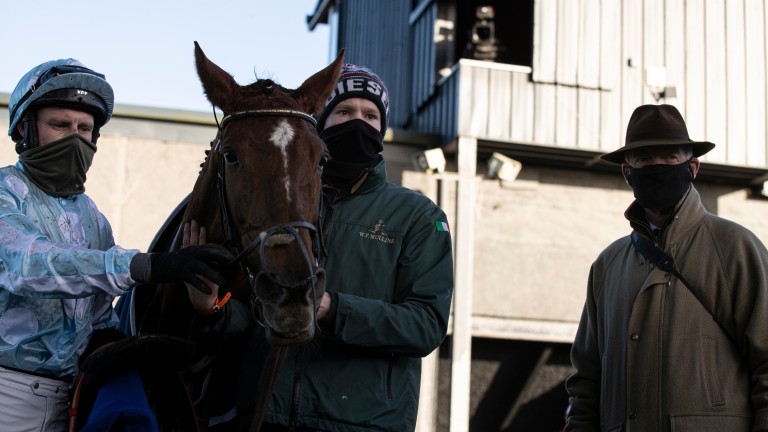 Gauloise: exciting four-year-old has now won on all three of her starts
Patrick McCann (racingpost.com/photos)
1 of 1
By Mark Boylan 5:11PM, DEC 20 2020

Owner Kenny Alexander appears to have another talented filly on his hands in Gauloise, who extended her unbeaten record to three in the Listed Irish Stallion Farms EBF Boreen Belle Mares Novice Hurdle.

The Willie Mullins-trained French recruit marked herself out as a bright prospect when making a successful Irish introduction at the track three weeks earlier, and was halved in price to 6-1 favourite (from 12-1) for the Mares' Novices' Hurdle at Cheltenham after Sunday's smart three-length success.

The 4-5 shot showed plenty of pace to get to the front smoothly in the straight, doing enough under Paul Townend to keep useful Flat performer Mighty Blue at bay in the closing stages.

Main market rival Sayce Gold, trained by Mick Winters, failed to prove as effective as previously over 2m, finishing seventh on her fourth run in 40 days after winning over 3m last time. 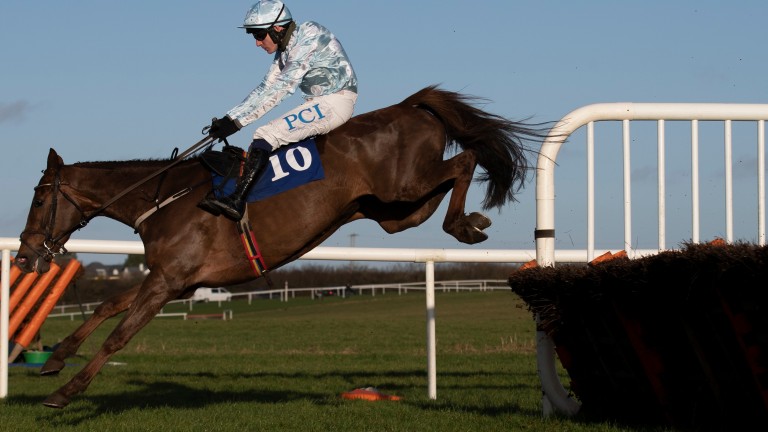 Willie Mullins on Gauloise: "I think she is going to improve again and the minimum trip is no problem to her"
Patrick McCann (racingpost.com/photos)

Champion trainer Mullins said: "At home it looked like she had improved and she showed me that at the track.

"I think she is going to improve again and the minimum trip is no problem to her. Paul said she took off with him after the second-last and he wasn't expecting that sort of response.

"He thinks she had to show stamina to stay after opening up her lead, so all in all it's looking good for her. I'd imagine she might have one more run before Cheltenham, but she looks like she's good enough to go up in grade."

Jack Kennedy and Gordon Elliott shared a double with Frontal Assault in the 2m7½f rated novice hurdle and the useful Escaria Ten in the opening 3m1f beginners' chase.

The latter recorded a particularly easy 20-length victory as 6-5 favourite and should be set for a fruitful 2021 campaign. 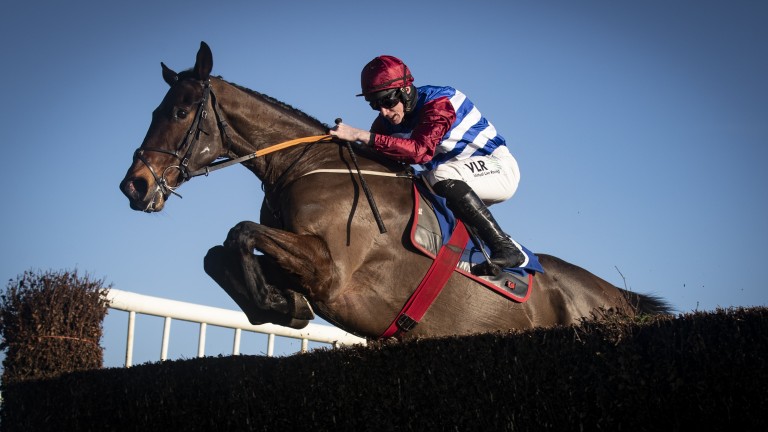 Jack Kennedy on Escaria Ten: "He's a nice horse and hopefully he can keep progressing from that"
Patrick McCann (racingpost.com/photos)

Kennedy said of the McNeill family's six-year-old: "He put in a great round of jumping. He's a nice horse and hopefully he can keep progressing from that. He ran well at Fairyhouse last time over two miles and five furlongs [when fifth to Monkfish] and the step up to three miles really suited him."

He added of the Gigginstown-owned Frontal Assault: "He's a big galloper and stays all day but he's just lairy enough when he's in front. When something came to him he pulled it out again."

Brown back in business

Conditional jockey Oakley Brown landed his first winner since requiring surgery on a wrist after a fall at Kilbeggan in October, and was seen at his best when guiding the Joseph O'Brien-trained Jack Dillinger to victory for the first time over fences.

Flame Bearer a name to remember

Market confidence behind Flame Bearer, trained by Pat Doyle, in the concluding bumper proved to be very well placed as the 4-1 chance (available at 20-1 overnight and 8-1 in the morning) won readily under Pa King, suggesting he could be quite a talented operator for the future.

FIRST PUBLISHED 5:11PM, DEC 20 2020
I'd imagine she might have one more run before Cheltenham, but she looks like she's good enough to go up in grade

Ballydoyle battalions primed to give Aidan O'Brien a ninth Queen's Vase win Racing delayed by nearly an hour after jockey Oakley Brown taken to hospital Improving Real Appeal makes the step up in class to land Ballycorus 'He could run a big one' - Joseph O'Brien and others on their biggest chances Watch now: follow the action from day one of Royal Ascot on Racing Post Live 'I can't believe his price' - find out who's bullish before the Wolferton