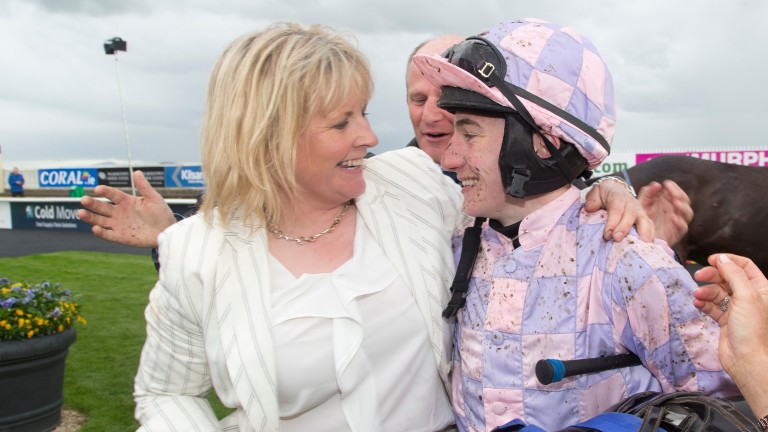 Amanda Mooney, secretary of the new Restricted Trainers Association, celebrates the victory of Repeater, her first winner, with jockey Killian Leonard at the Curragh in May
Patrick McCann
1 of 1
By Richard Forristal 1:21PM, NOV 8 2016

Introductory letters have been sent to Horse Racing Ireland and the Turf Club by a new representative body that has been formed to promote the interests of up to 250 restricted trainers.

Restricted licence holders can have no more than four horses qualified to run on the track at any one time. Their numbers have plummeted from 349 in 2009 to 248 last year, and the new Restricted Trainers Association is seeking to create a dialogue with the authorities in the hope of improving their collective lot.

Races confined to restricted trainers, an annual awards ceremony and unrestricted access to racecourses were among the proposals discussed at the association's first meeting.

"When you consider there are up to 250 of us with an average of two of three horses, restricted trainers needed a platform," said the new association's chairman John Fitzgerald, who handles a small string in County Limerick.

'Happy having a few horses'

"As a collective, we contribute a lot to the industry. Obviously some restricted licence holders are on a career path working towards a full licence, but there are a lot of us who have no ambition to go down that route and are just happy having a few horses.

"There were nearly 50 trainers at our first meeting, and we're meeting again in the first week in December. It was a very interesting dynamic, and we want to be positive and constructive."

He added: "A race or two confined to restricted licence holders would be brilliant, as it would give trainers something to aim for, similar to the way point-to-point bumpers work.

"And there are no awards for the top restricted trainers, so it would be nice to have a facility to acknowledge those who are doing well."

The association's secretary is Amanda Mooney, the treasurer is Kevin O'Donnell and John Long is public relations officer.

FIRST PUBLISHED 1:20PM, NOV 8 2016
A race or two confined to restricted licence holders would be brilliant, as it would give trainers something to aim for, similar to the way point-to-point bumpers work