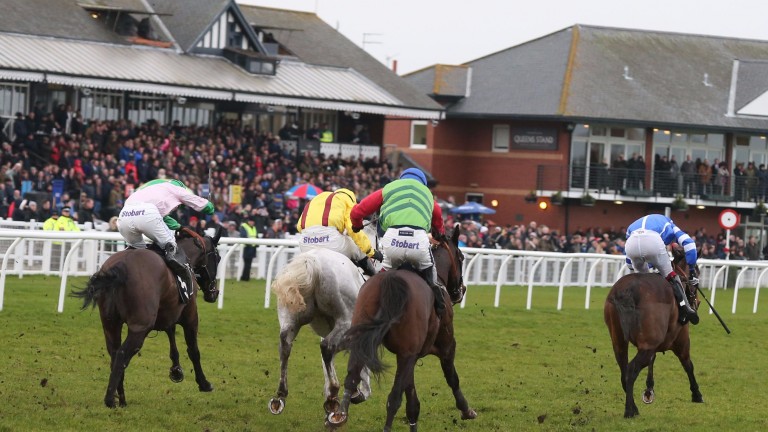 Musselburgh's trials fixture will be over two days for the first time
JOHN GROSSICK RACING PHOTOGRAPHY
1 of 1
By Scott Burton 12:26PM, FEB 3 2017

Musselburgh is gearing up for the expansion of its traditional Cheltenham trials meeting to spread across the weekend, with the inaugural bet365 Edinburgh National the highlight of this Saturday's card.

The 2015 bet365 Gold Cup winner Just A Par and Alvarado – twice placed in the Aintree showpiece and a runner-up in the Scottish Grand National at Ayr last April – are the star names among the entries for the £40,000 feature, for which Just A Par is 5-1 favourite with the race sponsor.

"We're very much looking forward to it and I think the Edinburgh National is a good concept," said Musselburgh chief executive Bill Farnsworth.

"These out-and-out stayers don’t get a lot of opportunities over the winter on anything other than heavy ground, which can be a tall order. We thought four miles around Musselburgh on better ground would be a nice race to have."

Saturday's card will have sporting opposition across town in the shape of the Scotland v Ireland rugby international at Murrayfield, but while Farnsworth is hopeful fans could opt to make a weekend of it and stay on for racing on Sunday, a bumper crowd is not the track's chief motivation.

He said: "We hope to get a decent crowd but this is more about putting something into the sport because we can produce decent ground at this time of year, and good horses need races ahead of Cheltenham, Aintree, Ayr and Punchestown.

"There is all this talk about the north lagging behind the south and we saw this as an opportunity to create something up here again."

The National will be supported by a second ITV4 race, the bet365 Scottish County Hurdle, while the Nicky Henderson-trained Charli Parcs – a late defector at Cheltenham last Saturday – could put his festival credentials on the line in the Triumph Hurdle Trial.

Sunday features trials for both the Sky Bet Supreme and Albert Bartlett, as well as the totepool Scottish Champion Chase

"If we feel it doesn’t work as best it might, we could make the Saturday all about the Edinburgh National and concentrate on the handicaps, and make the Sunday specifically the trials day."

FIRST PUBLISHED 2:51PM, FEB 1 2017
These out-and-out stayers don’t get a lot of opportunities over the winter on anything other than heavy ground and we thought four miles around Musselburgh would be a nice race to have in the calendar