More To Read FIRST FOR FRANKIE 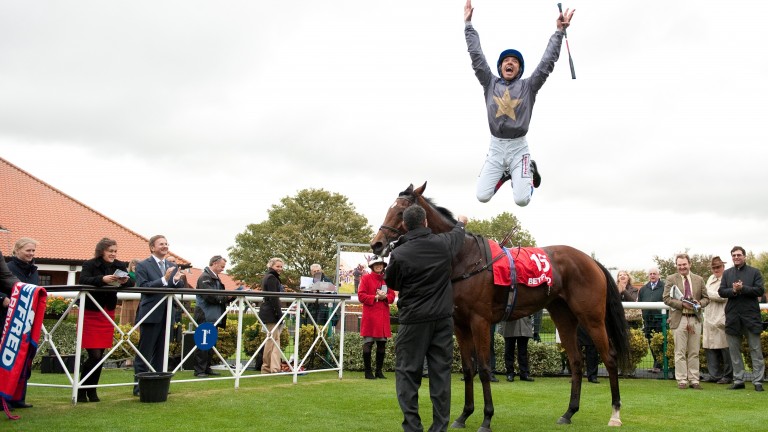 Frankie Dettori performs a flying dismount from Never Can Tell after winning the Cambridgeshire
Edward Whitaker
1 of 1
By Peter Scargill UPDATED 3:26PM, NOV 22 2019

He has landed more than 100 Group 1s, enjoyed winners at Royal Ascot, the Breeders' Cup and just about everywhere else, but not until yesterday had Frankie Dettori ridden the winner of the Betfred Cesarewitch. He has now – and what a ride it was aboard 25-1 chance Never Can Tell.

One year ago, connections would have had the ideal draw for a front-runner in stall 36, which would have been on the rail.

However, a high draw is now a bad thing, stuck out on the wing of the field and drastically reducing the chance of winning, even in a 2m2f slog such as the Cesarewitch.

As winning trainer Jamie Osborne put it: "It had been the plan for a long time and then you get the 36 draw and it doesn't help everyone's humour."

Dettori had told Osborne to "do him a favour" in the paddock and not give him any riding instructions and the jockey set about forming a plan to give him that first Cesarewitch success.

Fast out of the gates, Dettori managed to get Never Can Tell across to the rail where she bowled along in the second colours of owner Dr Marwan Koukash, who watched the race from home.

Turning into the straight it seemed the logical thing for Dettori to stick with his position on the inside rail, but he edged away from the others and steered a lonely route straight down the middle of the Rowley Mile.

With the wind blowing her along, Never Can Tell continued on her individual course while the other jockeys started to joust and jostle for position approaching the final furlongs.

The challengers lined up as Dettori and Never Can Tell ran into the Dip, but when they went to take on the filly at the front they found an impassable object.

Colour Vision threw down the strongest challenge, although he did not help himself by drifting right under pressure, before Ermyn Lodge had one last shot - although he too found he could not get past an inspired Dettori and determined Never Can Tell. 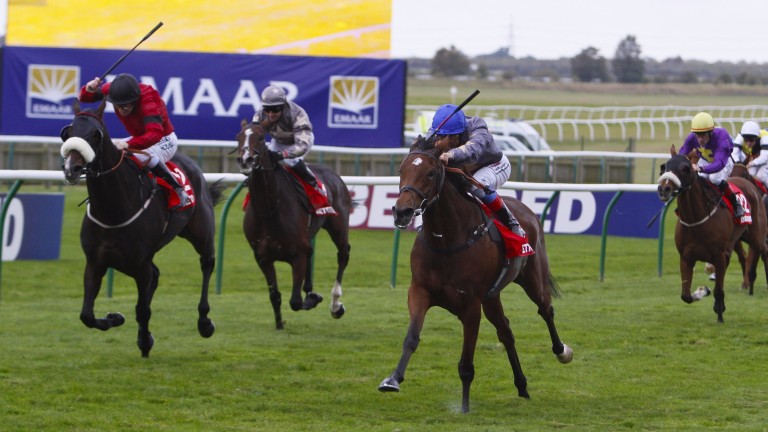 It was also a first Cesarewitch for Osborne, who said: "She's incredibly tough, as you can see. Her style of running is that she's always going to go forward and lead from the stalls.

"I didn't know what Frankie was doing up the straight by himself. He said he didn't want any instructions so I just said to him 'make sure it's the Frankie Dettori ride of the season' – and it probably was.

"I felt very much he was the right rider for her as there's no better man to judge the pace."

Osborne felt the race played right to the strengths of his winner, and added: "She was always doddling along with her ears pricked and doing her own thing.

"She's not very pretty and not very big but she's got a massive heart and she hates letting other horses past."