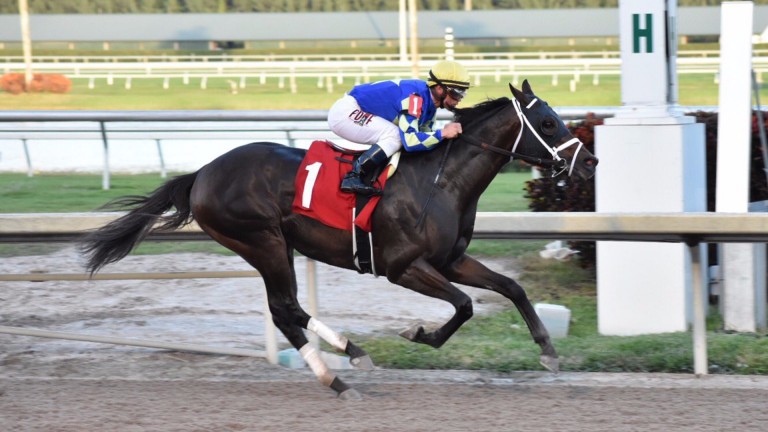 Neolithic earns himself a crack at the inaugural Pegasus World Cup with a nine-length success at Gulfstream Park
Unknown
1 of 1
By Nicholas Godfrey 3:09PM, DEC 15 2016

The number of confirmed intended starters for next month’s Pegasus World Cup increased by 50 per cent – from two to three – on Wednesday after Neolithic scored by nine lengths in a minor allowance race at Gulfstream Park.

The Todd Pletcher-trained three-year-old recorded a dominant front-running triumph in a minor 1m½f allowance race at the Florida track, set to host the inaugural running of the $12 million Pegasus – designed as the world's richest race – on January 28.

All 12 guaranteed spots in the starting gate have been sold at a cost of $1m apiece, the intention being that they can be put on the market to owners who would like to run their horses but did not buy at the initial sale.

However, until Thursday only two horses had been confirmed as intended starters, namely California Chrome – set for his prep race on Saturday at Los Alamitos – and Grade 1 winner Shaman Ghost. The latter’s owner, Frank Stronach, also owns Gulfstream and is behind the Pegasus concept.

Breeders' Cup Classic winner Arrogate, who beat California Chrome in an epic running of America’s most prestigious race at Santa Anita in November, is also expected to run, though his owners Juddmonte have yet to secure a berth.

On the other hand, Neolithic's owners Starlight Racing already own a place in the field – and their managing partner Jack Wolf is chief executive of the Pegasus team for the Stronach Group.

After the son of Harlan’s Holiday had made every yard to score at odds of 1-5 under Javier Castellano in Wednesday’s $43,000 contest, Wolf indicated that he would run in the Pegasus.

"Yeah, I think so, if he comes out of it in good order," said Wolf. "Or at the very least he could run in the $400,000 AE [also eligible, or reserve] race on the undercard. The way he did it was very impressive, especially the second quarter – he went pretty fast, and that gave me a little pause, but he kept it up."

FIRST PUBLISHED 3:09PM, DEC 15 2016
The way he did it was very impressive, especially the second quarter - he went pretty fast, and that gave me a little pause, but he kept it up