The Ballysax Stakes winner is one of five Ballydoyle inclusions

Nelson charges to victory at Leopardstown last month
Alain Barr
1 of 1
By Andrew Wilsher 6:03AM, MAY 9 2018

Aidan O’Brien accounts for five of the 12 entries to the Group 3 Derrinstown Stud Derby Trial at Leopardstown on Sunday, with Nelson, The Pentagon and Delano Roosevelt the notable inclusions.

James Cook and Zabriskie complete the list of Ballydoyle entrants, as the champion trainer looks to claim victory in the ten-furlong trial for the 12th time since first winning with Risk Material in 1998.

“The Derrinstown is always an important race as a trial and Nelson, Delano Roosevelt and The Pentagon look likely to be our three runners at the moment,” O’Brien said.

Nelson looked impressive when winning the Ballysax Stakes last month, while Delano Roosevelt was a close runner-up in the Beresford Stakes to Saxon Warrior last September. The Pentagon also lost out to the 2,000 Guineas winner, finishing third in the Racing Post Trophy last year. 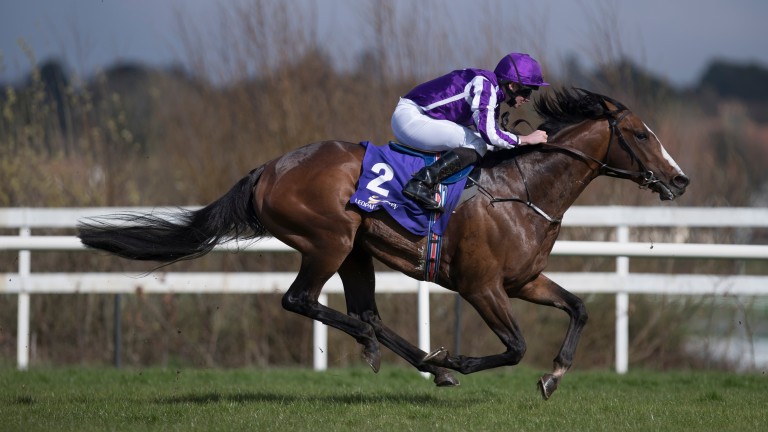 The Pentagon: should be suited by better ground in the Derrinstown
Patrick McCann

Jessica Harrington could be represented by The King, who beat Irish 2,000 Guineas-bound Imaging last year, while the Jim Bolger-trained Theobald is also in the running.

Dermot Weld has entered Burgundy Boy and Hazapour, Lethal Steps is the representative for Ger Lyons, while Arthurian Fame and Platinum Warrior complete the current field.

After winning the Salsabil Stakes at Navan last month, Willie McCreery has entered Mary Tudor and appears optimistic about the filly’s chances.

“I feel the better the ground, the better she will be. She is growing and maturing all the time and we are looking forward to Sunday.”