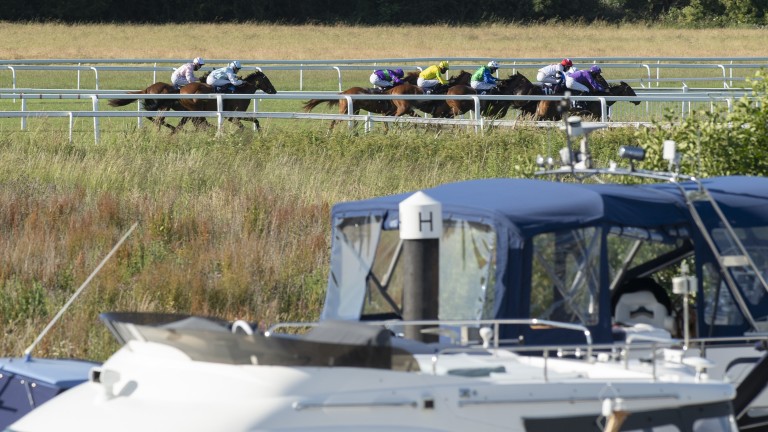 The three-year-olds at Windsor will be flying along in the 5f handicap on Monday's card, but which horse will come out on top?
Edward Whitaker (racingpost.com/photos)
1 of 1
By Bruce Jackson UPDATED 12:09PM, JUN 29 2020

If you have need for speed, this sprint will satisfy as there is blinding pace to spare among these eight runners and the fast nature of the course will see these talented three-year-olds take less than a minute to complete.

Ground conditions are set to play a part, and if the forecast showers materialise, it will benefit the likes of Rayong and last year's fairytale Super Sprint heroine Bettys Hope, while Will To Win and Lady Quickstep will need the rain to stay away to be seen at their best.

Surprisingly for a three-year-old sprint which could be billed as a battle of the sexes with half the field fillies, there are plenty of previous meetings and collateral form to go on.

Garsman put a recent run to good use to reel in the returning Poets Dance at Newmarket last time, while the other major strand is a Goodwood burn-up this month, featuring Electric Ladyland, subsequent course-and-distance winner Spanish Angel, who has a 6lb penalty to defy for that, and Bettys Hope.

Goodwood winner Electric Ladyland then failed to spark in the new Palace of Holyroodhouse Handicap at Royal Ascot, a race Will To Win was taken out of when the ground eased.

Apprentice Angus Villiers has ridden two winners from six rides for trainer Rod Millman and they team up with Bettys Hope.

Mick Appleby, trainer of Garsman
He won well last time and has done everything we've asked of him and there's still improvement in him on turf. It's a competitive little race.

Rae Guest, trainer of Poets Dance
She is very fast and I'd rather she had been drawn nearer the rail than on the outside. She has a nice weight though and ran well at Newmarket.

Simon Crisford, trainer of Will To Win
We're keen to try him over this trip, which would open up more options. He likes quick ground and has always worked nicely on good turf so the switch in surface is not a issue.

Rod Millman, trainer of Bettys Hope
She ran a nice race at Goodwood after being just a bit slow into her stride. Any rain about wouldn't be a problem and we're taking 5lb off with Angus [Villiers] who rode some nice winners for us last year.

Gay Kelleway, trainer of Lady Quickstep
She had an injury after running well behind Liberty Bell in the Hilary Needler at Beverley last year. She needed her first run back, was on the wrong side of the track and the ground was too slow for her. She is not very big but has no weight with George [Rooke] taking 5lb off.

FIRST PUBLISHED 6:00PM, JUN 28 2020
He won well last time and has done everything we've asked of him and there's still improvement in him on turf