Legendary dual-purpose rider Martin Molony, who won each of the five races open to professional riders on the 1949 Troytown Chase card at Navan
Alain Barr
1 of 1
By Noel Coogan UPDATED 6:17PM, NOV 23 2019

When six-time Irish champion jockey Martin Molony died just days shy of his 92nd birthday in 2017, he was described by many as the best dual-purpose rider of all time.

The three-time Classic winner, who finished third in the 1951 Derby on Signal Box three months after winning the Cheltenham Gold Cup on Silver Fame, was renowned for an array of notable feats, one of which reached a spectacular climax on the Troytown Chase card at Navan 70 years ago.

At the time, Molony was in unstoppable form, and on three consecutive racedays in 1949 he built up a sequence of seven winners from as many mounts. Five of those came at the Troytown meeting on Saturday, November 26, but his winning streak began at Sandown on the Friday.

The Limerick native, whose regular sojourns that season saw him finish second to his brother Tim in the British jockeys’ championship, partnered 7-4 favourite Irish Lizard to land the spoils in the concluding novice chase. 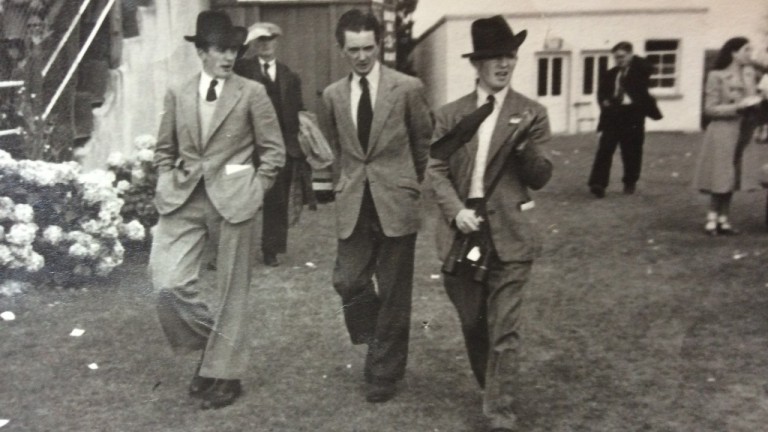 Come the Saturday, Molony rolled into Proudstown Park – as Navan was called at the time – and won all five races open to professional riders. Three of the winners, including the feature event hero Pelorus, were trained by Flat colossus Paddy 'Darkie' Prendergast.

The programme opened with 7-2 joint-favourite Cherrymount II, trained by Cyril Bryce-Smith, landing the Slane Steeplechase over two miles. In the second race, the Autumn Hurdle, Prendergast gained the first of his three successes with the 6-4 favourite Be Prudent.

Despite shouldering 11st 9lb, Pelorus was evens favourite in the ten-runner Troytown and gained a smooth four-length success from Toy Glen. Prendergast also owned the winner himself.

In his Irish Press report of the stayers' feature, writer Louis Gunning paid the following tribute to Molony: "The amazing skill and confidence which Molony brings to bear in all his races was seen at its very best in the feature event, the three-mile Troytown Chase, in which he waited on favourite Pelorus until a couple of fences from the finish and then, sitting down to ride a characteristic finish, dashed his mount past his rivals to win in seemingly effortless fashion."

The Prendergast treble was completed with 4-6 favourite Flash Arin scoring in the Brownstown Maiden Hurdle, and Molony's five-timer was achieved when 2-1 market leader Bluff King, trained by Tom Dreaper, won the Boyne Hurdle.

The last race on the programme was the Bective Amateur Riders' Hurdle and before the off one of the jockeys was heard to remark: "Thank God, Martin Molony is not riding in this!"

The winner was Old Nick, partnered by the up-and-coming Mr Pat Taaffe of subsequent Arkle fame.

On the following Monday, Molony was in action at Leicester and completed the amazing seven-in-a row when steering 2-1 favourite Skouras to win the third race, a three-mile chase.

He would go on to claim his first Classic six months later on Princess Trudy in the Irish 1,000 Guineas, and two years later he enjoyed his biggest National Hunt victory when the George Beeby-trained Silver Fame plundered the Gold Cup.

Cruelly, the three-time Irish Grand National-winning rider was forced to retire later the same year aged just 26 after sustaining serious injuries in a fall at Thurles. He returned to his native Limerick to run Rathmore Stud, which remains in the family to this day.

FIRST PUBLISHED 6:00PM, NOV 23 2019
Come the Saturday, Molony rolled into Proudstown Park – as Navan was called at the time – and won all five races open to professional riders