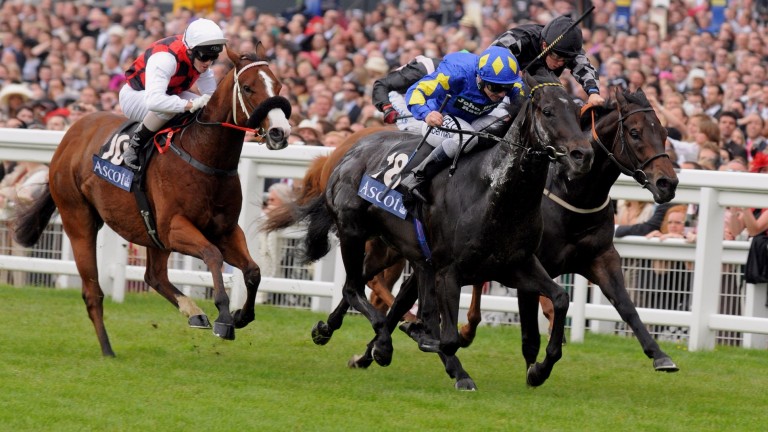 With Royal Ascot only nine days away, we take a look back to a famous sprint success nine years ago as our daily countdown to Flat racing's most magnificent meeting continues

If there was a suggestion Kingsgate Native had been favoured by over-generous weight for age when he made history by losing his maiden tag as a two-year-old in the Nunthorpe Stakes at York and followed up with a second in the Abbaye, his reappearance tenth in the King's Stand Stakes might have been seen as confirming that.

That's certainly what the market suggested when he reappeared in the Golden Jubilee just four days later and was dismissed as a 33-1 chance despite outstanding juvenile form. But we were in for a shock.

Ridden for the first time by Seb Sanders in what looked a really good field, Kingsgate Native got the cover he had been denied earlier in the week when running with the choke out and travelled well behind the leaders until making his challenge a furlong out, proving much too strong for the former South African star War Artist in a finish in which stands' side runners dominated.

Trainer John Best recalls: "He'd been a bit fresh first time out in the King's Stand, but I spoke afterwards to Chris Richardson of Cheveley Park Stud, who had bought him after the Abbaye in a deal which left him still racing for owner John Mayne, and I told him I'd like to run again at the weekend if he was all right.

"There was nothing to lose, so they were all up for it, and with the fizz taken out of him by the King's Stand it was pretty straightforward for a race of that nature.

"It was a very special day for me, as I'd missed out on the Nunthorpe celebrations because I was in America, and I'd also missed the Abbaye because I was flying to America. I could do with another one like him!"

A failure as a stallion, Kingsgate Native returned to training as a gelding and became a great favourite with the racing public. His Golden Jubilee might have been nine long years ago but he retired only last August, having still shown enough zip to beat the speedy Thesme at Nottingham that month.

FIRST PUBLISHED 9:00AM, JUN 11 2017
There was nothing to lose, and with the fizz taken out of him by the King's Stand it was pretty straightforward for a race of that nature.