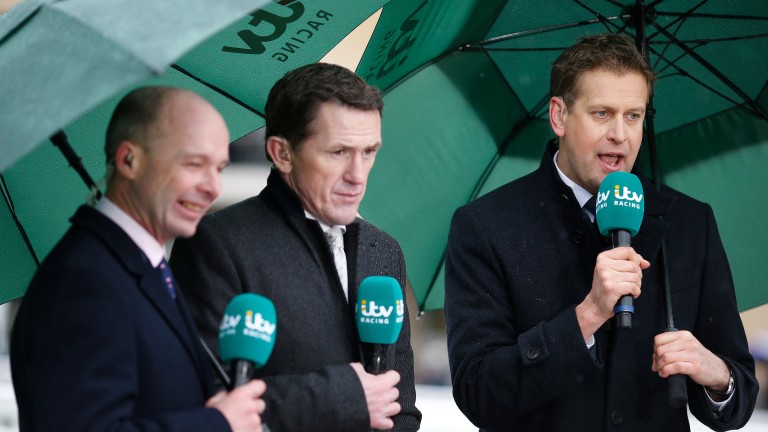 Amid much fanfare racing has returned to ITV after 32 years, attracting widespread scrutiny in Britain's newspapers and providing the sport with the sort of column inches it normally attracts only at major festivals.

And their reaction to ITV Racing's debut at a rain-sodden Cheltenham on New Year's Day was largely positive.

Lead host Ed Chamberlin, who had been lured from Sky, was praised for his assured performance. Alan Tyers of The Daily Telegraph felt the presenter had a "good dynamic" with analysts Sir Anthony McCoy and Luke Harvey, with Steve Jones of The Sun saying the pair had "the makings of a good double act".

Of the on-screen team it was the performance of Matt Chapman, deployed in a roving reporter role, which most polarised opinion. Mark Souster of The Times praised his "energy and enthusiasm", but Chris Goulding in The Express thought he was "bordering on becoming an irritant".

Souster added that "Chamberlin was at ease", testament to his professionalism as conditions in the exposed parade ring were certainly challenging.

"Not since Steve McClaren was seen drowning as England manager has the basic brolly played such a prominent part in sport's broadcasting," said Jonathan McEvoy in the Daily Mail – and the decision to brave the elements was certainly a big talking point.

Tyers felt the lack of a studio helped to create a good atmosphere, but Souster argued a contingency plan should have been put in place once it became apparent that conditions were so poor.

Chris Cook of The Guardian was more critical than most and said: "ITV Racing's impressive roster of talent did not combine to make the powerful, confident first broadcast for which producers must have hoped."

The Guardian also noted a concern, widely shared in other quarters, that the on-screen graphics were too small to read.