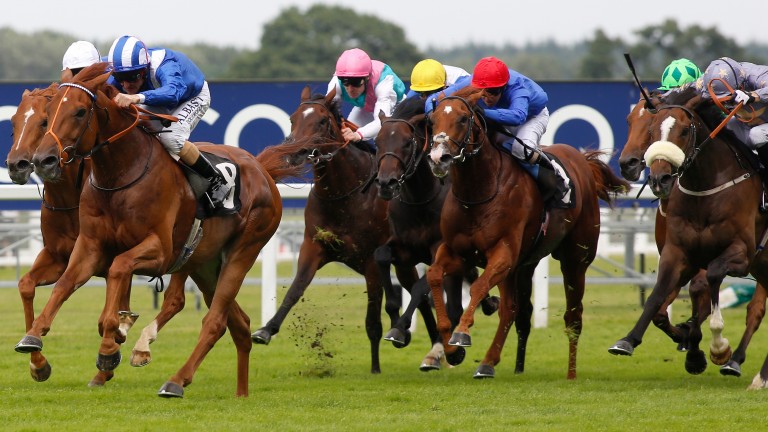 Second to Ribchester in the Queen Anne at Royal Ascot, Mutakayyef needed O’Neill get busy as Kaspersky burst clear in the straight. But the pair had enough in the can to pull away comfortably for trainer William Haggas.

Mutakayyef was little more than a length adrift in the Queen Anne and, backed into 4-7 by the off, was settled in midfield by O’Neill as Kaspersky, the ride of Melbourne Cup-winner Michelle Payne when fifth in the Group 1 at Royal Ascot, set the pace.

Martin Harley sparked Kaspersky into a four-length lead as they turned for home and for a moment looked like stealing the race as his five rivals laboured behind.

Mutakayyef was at the head of the chasing pack and when O’Neill asked the six-year-old to find more he responded, moving alongside Kaspersky before clearing away to win by three lengths, with Hathal in third.

The winner was dismounted on pulling up by O'Neill but came back into the winner's enclosure.

O'Neill said: "I just felt him pitching and shortening up when pulling up so jumped off him. Sometimes they give themselves a knock and it can feel worse than it is so hopefully he will okay."

Mutakayyef was able to travel back to his Newmarket stable with clerk of the course Chris Stickels reporting: "He was X-rayed down at the stables and they couldn't find anything. He has a swollen fetlock and is sore in that area and has been put in a cast to travel home."

The disappointment of the race was Sovereign Debt. Seeking a four-timer, the grey was held up at the back and never got into contention, going down by eight lengths.

FIRST PUBLISHED 4:01PM, JUL 15 2017
I just felt him pitching and shortening up when pulling up so jumped off him

More success for chairman Jeff Smith as Seattle King impresses on debut Big celebrations for Teal last week - and more reasons to smile with Princely Unbeaten Baaeed lights up first Saturday meeting back on the July course 'Hopefully he's not finished yet' - Rohaan continues his remarkable rise Doyle Force: Creative rider off the mark for the week as Appleby bags a 1-2 A day when two big decisions had to be made - officials at Ascot got both right