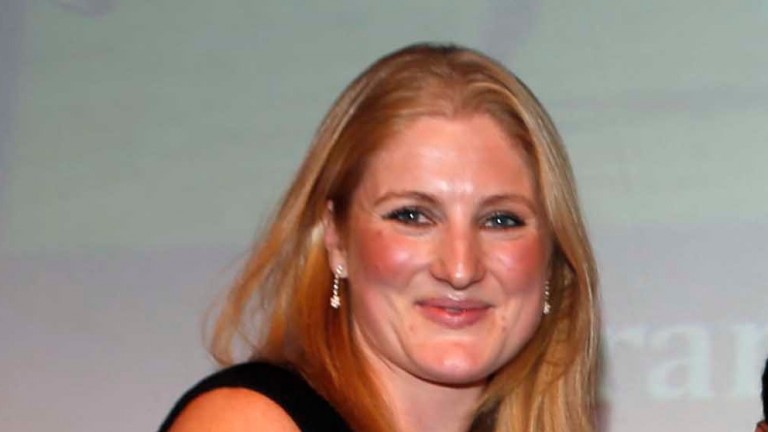 Susannah Gill: "I've had a wonderful four years at Arc"
1 of 1
UPDATED 10:22AM, APR 29 2018
Arena Racing Company's director of external affairs Susannah Gill is set to leave the group next month.

Gill will remain a committee member of Women in Racing and a member of the Diversity in Racing steering group, as well as a trustee of the Northern Racing College and Racing Foundation.

She said: "I have had a wonderful four years at Arc. I'm proud to have worked with such a great team of people and I wish everyone at Arc all the best for the future. I look forward to taking on a new challenge in the coming months."

Officials at Nottingham will inspect the track at 4pm on Monday to assess conditions for Tuesday's fixture. The going on Sunday was described as soft, but the forecast on Monday is for heavy rain.

Hadden Frost finished third in the Maryland Hunt Cup at Worthington Valley, near Baltimore, on Saturday.

Only three of the nine runners completed, with Senior Senator and jockey Eric Poretz leading throughout to record a five-length victory in the 122nd running of the race.

Joshua G finished second, with Drift Society and Frost third, some 140 and a quarter lengths behind.

On what was a big day for the Frost family, Hadden's sister Bryony also finished third in the Bet365 Gold Cup at Sandown on Present Man.

Beckford rallied from far back in the stretch to run down pace-setter Salmanazar by three-quarters of a length to win the $100,000 William Walker Stakes at Churchill Downs on Saturday.

A Group 2 winner in Ireland last year when trained by Gordon Elliott, Beckford was making his debut for trainer Brendan Walsh and having first start since finishing fifth in the Breeders’ Cup Juvenile Turf behind Mendelssohn.

Rider Julien Leparoux said: “He’s a very fast horse. I knew he needed a target in front of him so we sat off the pace in a good spot around the turn and he flew home. I think he is going to have a very bright future. Brendan and his team did a very nice job with him.”

Beckford has an entry in the Commonwealth Cup at Royal Ascot, for which he is between a 12-1 and 20-1 shot.

The 2018 Foran Equine Irish EBF Auction Series will offer aspiring owners and trainers a unique shot at €617,000 in prize-money and the prospect of a €120,000 final at Naas in October.

Now in its fourth year, the series is aimed at two-year-olds bought at auction for €72,000 or less and to a European Breeders Fund-registered sire, with the first of 22 qualifiers taking place at the Curragh on May 11.

Created in partnership with Horse Racing Ireland, the series provides a minimum prize-fund of €20,000 in qualifying races and, with the added benefit of being Plus 10-registered, opens more avenues for potential owners.

Trainer Patrick Prendergast said: "I'm a major fan of the Foran EBF Series, it encourages the smaller owner to buy horses. It’s a good sales pitch for me when I go to sales. I can say to them that you have a good chance on your investment.

"This whole thing is achievable, you buy a horse, syndicate it for a reasonable budget, then there's a programme of races and a final to aim at. I have a good string of two-year-olds this year, they are nearly all eligible and we'll be aiming at the series with plenty of them."

Before the series started in 2014 there were only eight auction races of this kind in Ireland, but there are now 23 thanks to the growth of the series, which has seen the total number of runners double since 2015 to 287 last year.

Last year 50 per cent of winners were bought at auction for €19,000 or less with the overall winner Yulong Gold Fairy bought for €8,000. It is hoped the series will continue to stimulate the lower end of the auction market.

Each winning breeder and trainer will receive a €150 voucher for Foran Equine products with the winning trainer also receiving a pack containing many of their 'performance range' products.

The Acropolis provided the spectacular backdrop for the European and Mediterranean Horseracing Federation’s General Assembly this year, which was held at the Ionic Centre, Athens.

Brian Kavanagh, EMHF Chairman, said: “I am most grateful to the Jockey Club of Greece, our newest member country, for hosting this year’s General Assembly and delighted that the turnout of 20 countries equalled our previous record.”

All countries confirmed that they had either already introduced the new world standard for the treatment of interference cases - which was adopted by the International Federation of Horseracing Authorities (the EMHF’s parent body) in October 2017 - or would do so by the end of the year.

This will see a harmonised interference rule across the European and Mediterranean region and follows the staging of two EMHF seminars on the subject earlier in the year.

The EMHF welcomed the Lithuanian Horse Racing Association as the new member organisation for that country. The LHRA was appointed last year by the Lithuanian government as its governing authority for horseracing and received an inspection visit by EMHF secretary-general Paull Khan in November. Lithuania’s sole racecourse is at Raseiniai, midway between the capital Vilnius and the Baltic Sea.

Delegates heard presentations from Danish Jockey Club CEO Peter Knudsen on recent changes to the betting laws in his country, from Khan on lessons to be drawn from European Commission decisions on the statutory funding of horseracing, and on the WhipChip from its inventors Ferhat and Erin Tigrel.

Kavanagh added: “The Federation is a very good way for racing authorities to exchange views and best practice and to learn from each other. Now eight years old, it continues to promote horseracing in the region.”

Sophie Doyle rode a four-timer at Hawthorne, near Chicago, on Thursday, taking her 2018 haul to 17 winners from 129 rides.

Her victories came on Charged, Hannity, She's Coal Fired and Ready To Fight, all for different trainers.

She tweeted: "Wow what a day @ClubHawthorne Thankyou to the horses for their winning performances & to their trainers & owners for the opportunity to get you the Win, THANKYOU."

Musselburgh, whose future is in doubt due to warring factions, has been granted a temporary licence by the BHA to race next week.

The track – at the centre of a bitter spat between East Lothian Council, which owns the site, and the Lothians Racing Syndicate with which it had governed racing there since the early-1990s – is due to stage fixtures on Thursday and Friday next week.

"An update regarding the state of Musselburgh's racecourse licence beyond May 5 will be issued in due course."

It has been reported by the LRS that a licence will be granted for the full Flat season, running to October 16, subject to a new minute of agreement being signed by the council and LRS.

After the May 4 fixture, no racing is due to take place at Musselburgh until Saturday, June 2, which is the annual ladies' day fixture and one of the most important to the track in terms of revenue and prestige. It typically sells out and stages a Listed race and the valuable Edinburgh Cup handicap.

Jamie Codd faces summer on the sidelines with back injury

Reigning champion amateur Jamie Codd could be out for up to four months after it was confirmed the Wexford native has suffered a fracture to his L3 vertebra in his lower back following a fall at Ballysteen on Sunday.

He said: “I have spoken to Jamie and unfortunately he has a fracture to his L3 vertebra so he will be out for a while. The normal recuperation period for something like that would be three to four months.”

McGoldrick also provided an update on amateur Brendan Walsh, who was trapped under Peter Maher's Enniskillen after the 13-year-old fell in Tuesday's opening Ladies Cup at Punchestown.

McGoldrick said: "Brendan suffered a very nasty fall on Tuesday and he has been sent for x-rays and I will know more on Wednesday afternoon. He was left trapped under the horse for some time."

FIRST PUBLISHED 8:57AM, APR 29 2018
The temporary licence means that the racecourse’s fixtures which are programmed for May 3 and 4 can go ahead as scheduled