Paul Mulrennan suffers triple back fracture after fall on gallops 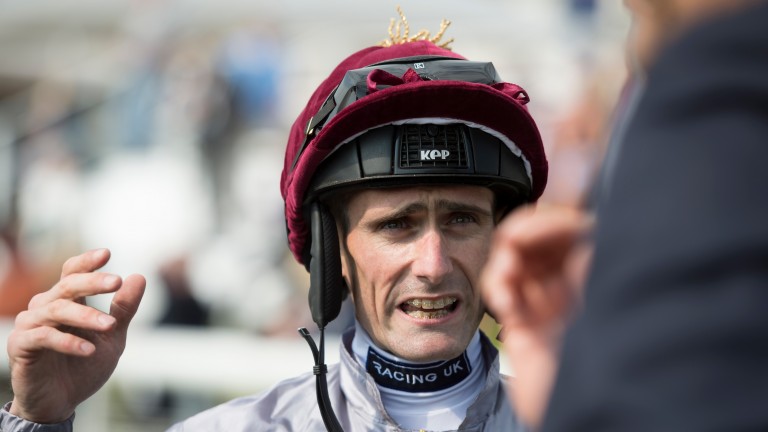 Paul Mulrennan was counting himself fortunate not to have been more seriously injured after suffering a triple fracture of his back in a fall on the gallops on Saturday.

The jockey, 36, could be out for up to six weeks, missing the peak summer period, but faces no surgery as a result of the accident, which occurred when a horse he was riding planted itself on Michael Dods's gallops.

Dods called an ambulance for Mulrennan, who was taken to Darlington Memorial Hospital, where he underwent x-rays to assess the extent of the damage.

"I have fractured my L2, L3 and L4 in the lower lumbar area but it could have been a lot worse – I'm lucky," said Mulrennan.

"It was just a freak accident, it comes with the job. I'll be back sooner rather than later, fitter and stronger. All I can do is rest."

His wife Adele, who joined him in hospital, said: "Paul doesn't have to have surgery but it's going to be a matter of bed rest for a couple of weeks and then some rehab.

"He can move his feet and his neck; it's the middle part of his body which is where he sustained the injuries.

"He'll be staying in hospital for the next night or two because he needs to see the back specialist. He was told it could take four to six weeks. It could have been a lot worse because it was right at the side of his spine."

Mulrennan was taken off his rides at York, where he had been set to partner Master The World, who was unplaced, in the John Smith's Cup, and Get Knotted, who finished second for Dods in an earlier handicap.

Dods explained the accident, saying: "Paul's horse was trotting away down to the start of the gallop when it slammed on and Paul went over its head and landed awkwardly on his bottom. He couldn't sit so we got an ambulance for him."

Also in the wars on Saturday was Richard Mullen, who was taken to hospital in Mauritius after a fall. However, he was discharged a few hours later and tweeted that he was all right apart from feeling "battered and bruised".

FIRST PUBLISHED 1:00PM, JUL 14 2018
Paul's horse was trotting away down to the start of the gallop when it slammed on and Paul went over its head and landed awkwardly on his bottom