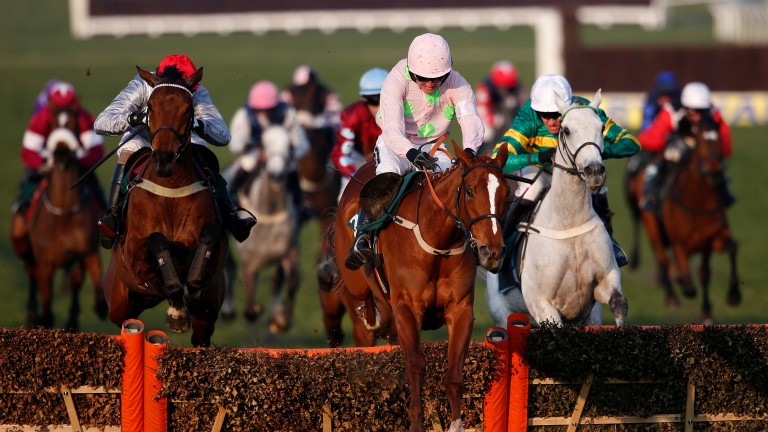 Limini: pleasing Willie Mullins with her work on the gallops at Closutton
Alan Crowhurst
1 of 1
By Brian Sheerin 4:29PM, JAN 16 2017

If history is anything to go by, Willie Mullins will go on and train the winner of the OLBG Mares' Hurdle at Cheltenham and the Irish champion jumps trainer has provided an upbeat bulletin on potential leading contender Limini.

“She has really come to herself in the past few weeks and is really pleasing me,” Mullins said.

Stablemate and former festival queen Quevega landed six consecutive mares’ hurdles throughout notoriously light campaigns but Mullins admits he would be eager to get a prep-run into Limini as he attempts to stretch his winning sequence in the race to nine.

“If I can get a run into her before Cheltenham I will but it might be hard to find a race for her now.

“Her main target at the moment is the mares’ hurdle and she is looking like she is back to herself.”

An easy winner of the inaugural mares’ novice hurdle at Cheltenham last season, the Rich Ricci-owned Limini can be backed at odds of 14-1 to record back-to-back festival wins in the mares’ hurdle in March.

Reflecting on Saturday’s defeat of Crack Mome in the Grade 2 Moscow Flyer Novice Hurdle, Mullins believes the five-year-old remains an exciting prospect and puts his defeat at Punchestown down to inexperience.

“He ran a bit green at Punchestown and he was just beaten by a very good horse in Any Second Now.

“We still think we have a very nice horse on our hands. I hope better ground would bring out a better performance and there are still plenty of good races to be won with him.”

FIRST PUBLISHED 4:29PM, JAN 16 2017
She has really come to herself in the past few weeks and is really pleasing me