Talk of the Tracks WEXFORD

Mullins makes hay as Tiepy cracks it for Walsh and Ricci 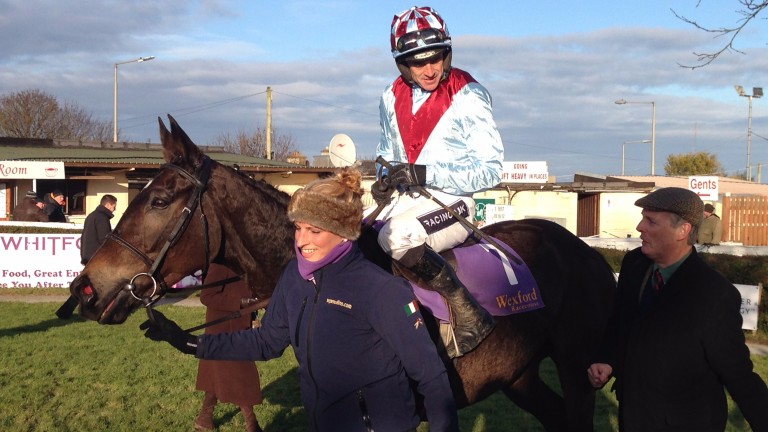 Daisy's Gift and Ruby Walsh after landing the mares beginners chase at Wexford on Tuesday
Justin O'Hanlon
1 of 1
By Justin O'Hanlon 10:01AM, NOV 24 2016

Three years have elapsed since Willie Mullins chose the equivalent Wexford meeting to introduce Vroum Vroum Mag to an Irish audience, and there is every chance this fixture will ultimately be remembered for the domestic debut of Crack Tiepy, likewise owned by Rich Ricci.

The 2m4f conditions hurdle was judged the right race to introduce her, especially as her four-year-old allowance meant she was in receipt of plenty of weight - 17lb, indeed, from the geldings.

Whether she needed such an advantage was arguable as she put in a very clean round of jumping and never had to come off the bridle in accounting for the somewhat rejuvenated Moonshine Lad by two and three-quarter lengths.

For rider Ruby Walsh there seems to be a little bit of guesswork involved as to how good Crack Tiepy might be. She is out of a half-sister to Pomme Tiepy, who enjoyed plenty of success in the same silks.

Walsh said: "Getting 17lb was a big help and it was a huge pull. She had run in five or six chases in France too, so she had plenty of experience. If she ends up winning half the races Pomme Tiepy won we'll be happy enough."

The mares' beginners' chase was transformed at the first fence when warm favourite Slowmotion came down - luckily she and rider Barry Geraghty emerged unscathed - but it proved to be a race of quality in any case.

Mullins and Walsh were the chief beneficiaries when the Nigel King-owned and bred Daisy's Gift came from off the pace to beat Keppols Queen by five and a half lengths.

"She had very good form over hurdles but it was back to the drawing board with her a bit after her two runs over fences after she fell at Kilbeggan and jumped badly at Galway," said Walsh.

"She's done plenty of schooling since and it worked out today. It was a real good gallop, it turned into a test of stamina and it suited her."

Cloudy continues on the upgrade
It is safe to say Cloudy Morning was far from trustworthy before joining the stable of Declan Queally, but his fortunes have taken a huge upward swing since.

That was never more evident than in the 3m handicap hurdle here as he recorded a convincing success under Barry Browne, completing a hat-trick.

Queally snr holds the licence, but the de facto trainer is son Declan jnr, and he said: "He was a bit of a monkey when we got him but we've varied it with him, taking him to the beach and to different gallops, and he's enjoying it.

"He's improving and we might go for one of the staying handicap hurdles at Leopardstown off a low weight."

Thought for the day
Clearly this particular Wexford meeting sits in a very good place in the calendar as it does attract a better quality of horse than at any other meeting during the year. It is important they keep it.

FIRST PUBLISHED 4:33PM, NOV 22 2016
If she ends up winning half the races Pomme Tiepy won we'll be happy enough