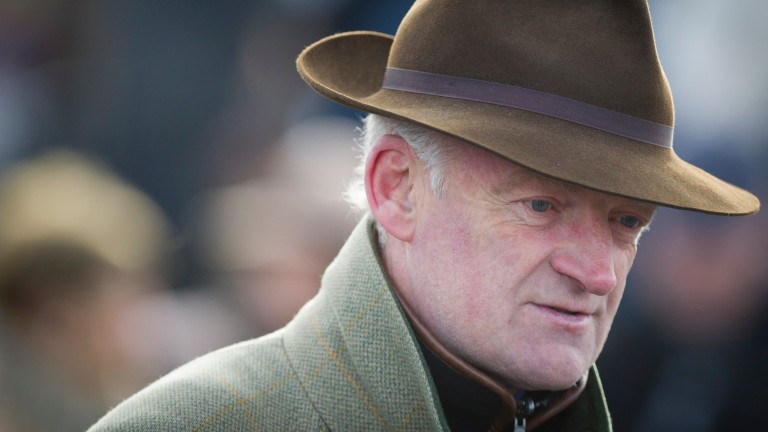 The ref isn't ready to step in just yet, but Willie Mullins will need to start throwing some punches.

It has been a difficult few months for the County Carlow conditioner after the loss of 60 Gigginstown House Stud-owned horses and the serious assault from Gordon Elliott on his trainers' title.

The death of Vautour, possibly the best horse Mullins will train, and the fatal injury Avant Tout suffered at Naas last month, have not made things much easier and while it would be going too far to say the crown is slipping, it's no longer as solidly attached as once it was.

Whether events this autumn have affected Mullins this week is not clear, but the tricky times have continued.

Douvan was in today's Betfair Tingle Creek at Sandown, but bookmakers priced him like he was out. Punters then backed him as if he was in, only for Mullins to take him out.

That won't faze him

He copped some flak on social media, but that won't faze him; his responsibilities lie with his owners and horses and it wouldn't be the first time he has kept his cards close to his chest and played them late. Usually, he lays down a flush.

Roger Varian will probably not recall the build-up to Kingston Hill's St Leger win fondly when he implored Doncaster to water. It was toys-out-of-the-pram stuff from one of the sport's classiest operators, but he ended that week with a big-race triumph and Mullins can do the same as he will still be represented in the Tingle Creek.

With Douvan diverted to Cork next week, he relies on exciting front-runner Un De Sceaux to deliver the knockout blow in today's £150,000 Grade 1, one of the best pre-Christmas treats of the jumps season.

The eight-year-old, Mullins' first runner in Britain this season, looked a potential world-beater over hurdles, but has not has not always been the most fluent over fences.

He has fallen twice and was Sprinter Sacre-ed in the spring, but is rated the one to beat by bookmakers, even if softer ground would increase his chances.

He meets Ar Mad and Sire De Grugy, a twin strike force for Sandown specialist Gary Moore, whose sons Josh and Jamie ride. Moore could not find a mount for his other lad Ryan, but with 189,320,000 yen (£1.3 million) on offer in tomorrow's Champions Cup, Japan's most prestigious dirt race, it's unlikely he'd have been tempted off Nonkono Yume and back from the far east.

Ar Mad was lethal at this fixture 12 months ago and while Sire De Grugy does not quite have the same ring as Tingle Creek, the popular chaser remembered in today's feature, there will be a huge roar if he records his third win in the race that may be headed to Lambourn in 12 months if Racing Post Arkle favourite Altior delivers on his promise.

Altior puts his credentials on the line this afternoon in the Racing Post Henry VIII Novices' Chase on Sandown's undercard, while the Channel 4 cameras will also be at Aintree's meeting.

It is the first glimpse this term of the sport's most famous fences and the thrills and spills associated with the Grand National are likely to occur in the 23-runner Betfred Becher Chase, which has unsurprisingly attracted a bumper field with a £140,000 pot on offer.

A class horse is now needed to get a National run in the spring so hurdle preps may become less fashionable and perhaps that's another reason for the turnout, which includes The Last Samuri, second in the big one in April.

He concedes weight to his rivals, five of whom also finished behind the now-retired Rule The World.

The big fences are also in action in the Betfred Grand Sefton, for which a healthy field of 17 has been assembled, while last year's Aintree hero Many Clouds runs in the Listed chase.

Fresh from a wind operation, the nine-year-old will be pointed in only one direction this season and that's a return to the scene of his greatest triumph, although the only sight of the National fences he'll get is when Leighton Aspell launches him at them at 5.15 on April 8.

He is reported to be gleaming and a sign of his well-being is the chunks he has been trying to take out of his devoted groom Chris Jerdin this week.

Many Clouds is a real heavyweight, but so too is Mullins, who incidentally has a National triumph on his CV.

He has faced the most testing time of his career, but the true mark of champion is how they respond in adversity. Expect him to come out fighting.

FIRST PUBLISHED 4:46PM, DEC 2 2016
It wouldn't be the first time he has kept his cards close to his chest and played things late