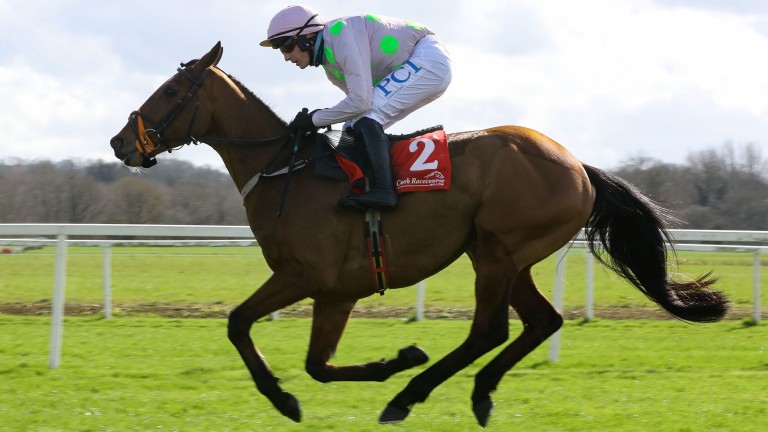 Bapaume: part of a Willie Mullins treble at Tramore on Sunday
Lorraine O'Sullivan (racingpost.com/photos)
1 of 1
By Mark Boylan 6:23PM, APR 18 2021

Willie Mullins fired just four bullets at Tramore's seven-race card but returned with three winners and a third, highlighted by feature-race success for the talented Bapaume.

The 11-8 favourite showed his versatility by reverting to fences in the 2m5½f chase to win by eight-and-a-half lengths from Us And Them.

It was the second half of a double for Brian Hayes, who deputised for the sidelined Paul Townend.

"I made this race for myself!" joked Mullins, who is a director at the Waterford track. "We saw the conditions of the race and it was a nice opportunity for him to come back over fences."

He added of the 2018 Prix la Barka winner: "Going that little level lower than previously has given the horse plenty of heart and confidence to race again. Brian said he was really enjoying his jumping. 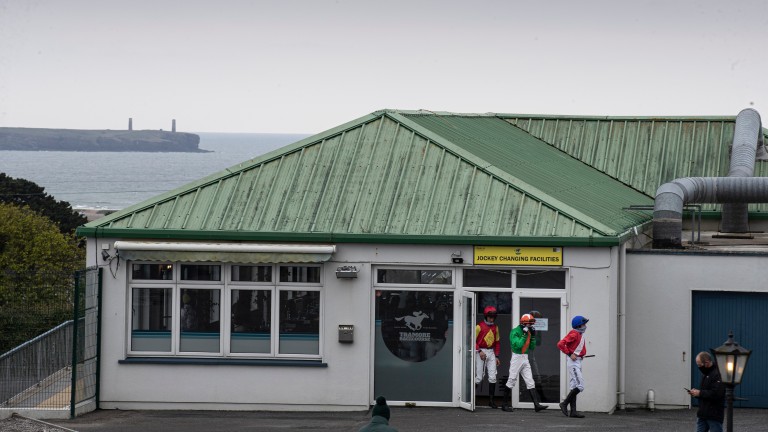 Conor McNamara (blue cap) leads the riders out before his win on En Beton for Willie Mullins
Patrick McCann (racingpost.com/photos)

"We'll probably go back over hurdles at Punchestown, possibly for a handicap hurdle, if he comes out of this well. Otherwise, we can look over the next month for a similar type of race down the country."

There was a sad postscript to the race as 2019 Arkle third Articulum, who had flown the flag gallantly for Terence O'Brien's team over many years, suffered a fatal injury after the last fence.

Earlier on the card, O'Brien had struck with 25-1 shot Ballyadam Destiny, who benefited from an excellent front-running ride by Mikey Hamill.

The first two legs of Mullins' double were courtesy of consistent mare Gelee Blanche, who could be Galway festival-bound this summer for the Tiger Tail Again Syndicate, and Cheveley Park-owned seven-year-old En Beton, getting back on track with a ready win under Conor McNamara. 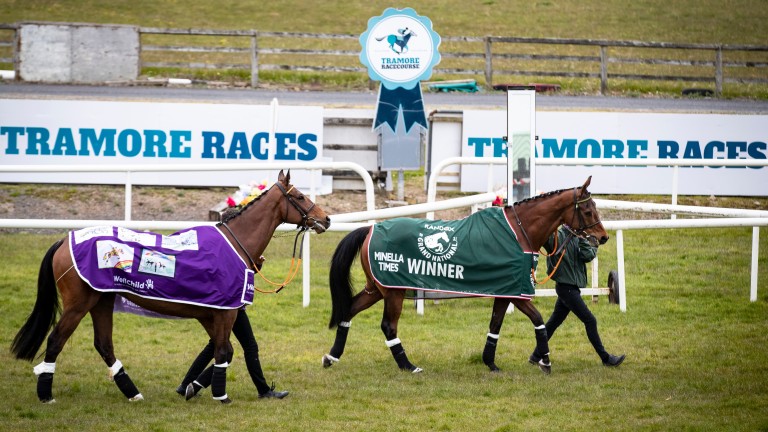 Mullins said of the latter: "He just had little niggles all season and we never got him going. He looks a big, chasing type and that's what we'll do with him."

There were no public crowds to greet them but the equine stars behind Henry de Bromhead's unprecedented spring were on parade at his local track, with all cameras trained on Honeysuckle, Minella Indo and Put The Kettle On, as well as Grand National one-two Minella Times and Balko Des Flos.

"I know it's such a shame that crowds can't be here, but it was lovely for us and all the team to get such a great reception," said the trainer, who struck with exciting mare Mind Your Money in the concluding bumper.

He added of the Harry Swan-ridden winner: "She's a lovely mare and her run last time in Listed company when fourth looked really good. She jumps well at home, so hopefully she'll have a nice career over hurdles."

Rachael Blackmore was out of luck in her four rides and was forced to miss her fifth mount after a fall at the last on Game Of War.

Despite being shaken from the spill, she was reportedly fine and remains eight winners adrift of the reigning champion jockey in her title bid.

Follow your favourites with our amazing Horse Tracker feature. Add up to 1,000 horses to your stable, filter them and keep up to date with automatic email alerts. Join Members' Club Ultimate now and never miss a winner again! FIRST PUBLISHED 6:23PM, APR 18 2021
Going that little level lower than previously has given the horse plenty of heart and confidence to race again