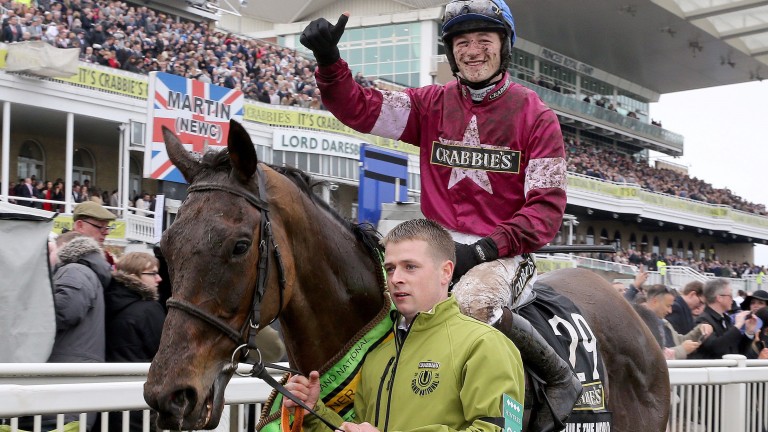 David Mullins: the Grand National-winning rider is in good spirits after his Thurles fall
GROSSICK RACING PHOTOGRAPHY
1 of 1
By David Jennings 2:51PM, JAN 27 2017

David Mullins, the only man to have mastered Faugheen, is out to do it again on board Champion Hurdle hope Petit Mouchoir on Sunday.

Mullins was on board Nichols Canyon when Faugheen suffered the only defeat of his career in the 2015 Morgiana Hurdle at Punchestown and he believes history could be repeated in the BHP Insurances Irish Champion Hurdle at Leopardstown when he is reunited with the Henry de Bromhead-trained six-year-old.

Faugheen might be odds-on to win back-to-back Irish Champion Hurdles on his first start for a year but Mullins expects Petit Mouchoir, successful in the Grade 1 Ryanair Hurdle over Christmas, to dish it up to him.

He said: "I think Petit Mouchoir has a great chance. I rode him at Aintree last year when he was just pipped by Buveur D'Air and I knew then that he had the makings of a Grade 1 horse, although I thought it might not be until he was sent over fences that we'd see the best of him.

"I've beaten Faugheen before and I'd love to do it again. He hasn't run in a year and, while he is an unbelievable horse, if he's not back to himself then hopefully Petit Mouchoir will be there to pick up the pieces.

"He's a tough, hardy horse who keeps galloping and he can quicken off a strong pace too which is crucial. I've always liked him."

The 20-year-old, who continues to deputise for the injured Bryan Cooper, does not only have Petit Mouchoir to look forward to on Sunday but also Identity Thief, who is set to take on Min in the Frank Ward Solicitors Irish Arkle.

Mullins believes Identity Thief can erase the memory of his below-par effort when pulled up in the Racing Post Novice Chase at Leopardstown over Christmas.

He said: "I schooled him on Monday morning and he was very good. He seems to have his confidence back."

The going at Leopardstown was on Wednesday good, good to yielding in places on the hurdle course and good on the chase course. It is forecast to be dry until Friday night before 5-10mm of rain through to Saturday morning, with drier weather on Sunday.