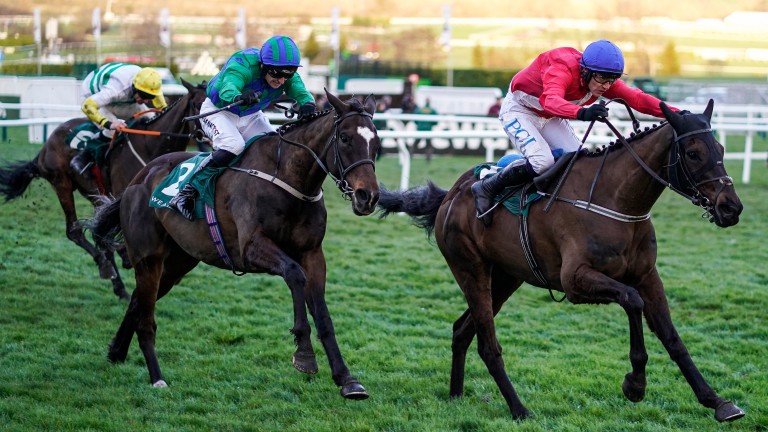 They say the best time to score is just before half-time and, while it was later than what has become the norm, Willie Mullins finally opened his festival account for the year with the last kick of day two thanks to Ferny Hollow's impressive win in the Weatherbys Champion Bumper.

Having struck the woodwork with Sharjah and Benie Des Dieux on day one and lost star striker Chacun Pour Soi during the warm up for day two, things had not exactly gone to plan for Mullins. 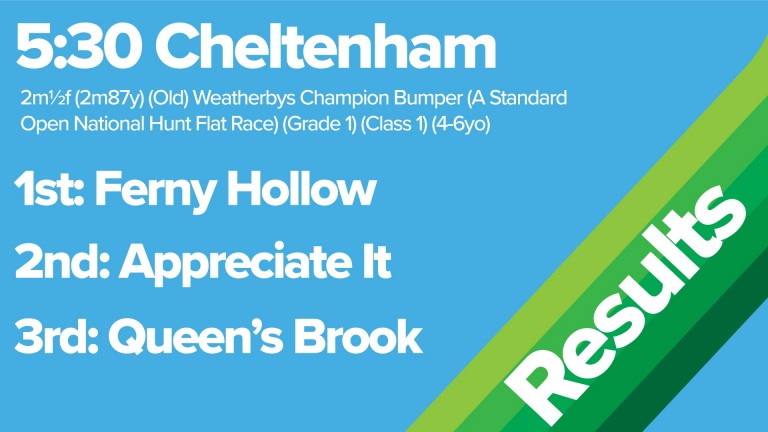 But the Champion Bumper has become a close friend to Mullins since he trained and rode Wither Or Which to victory in 1996 and it sailed to the rescue once more as Ferny Hollow handed him a tenth triumph in the race.

"It's nice to get on the scoreboard," said Mullins, who also saddled 15-8 favourite Appreciate It to finish second.

"They're two nice horses. I thought Appreciate It had it won turning for home but I could see Paul Townend [riding Ferny Hollow] coming and he's won quite easy in the end. I'd say he will probably go for the Champion Bumper at Punchestown now and maybe the same for the second."

Reflecting on the week so far, the trainer added: "Everyone was a little bit down and things weren't going right for us, but maybe that's the turnaround for us."

Also looking forward to the second half is Paul Townend, number-one jockey to Mullins since Ruby Walsh stepped aside last year and with all eyes judging his every move.

"Coming here this year I was in the hot seat and it's been a long two days, but when you're riding for a team like Mullins there's a fair chance one will come and thankfully it did," said the rider, also celebrating a first win of the week.

Victory capped a fine day for owners Cheveley Park Stud after earlier success for Envoi Allen in the Ballymore and Allaho's near-miss in the RSA.

"Two winners and a third from three runners is brilliant," said Cheveley Park's Richard Thompson. "It's hard to put it into words and they're nice horses for the future, too. The day has been excellent."

FIRST PUBLISHED 7:07PM, MAR 11 2020
When you're riding for a team like Mullins there's a fair chance one will come and thankfully it did

Ruby Walsh: Faugheen's first defeat was my fault - I was trying to be too clever Find out about Members' Club, the ultimate resource for racing fans and punters All to play for as the Jockey Club weighs up the pros and cons of a fifth day Find out what a five-day Cheltenham Festival could look like 'An act of self-sabotage not to' - views for and against a five-day festival A five-day Cheltenham Festival? How racing reacted to the news on social media