Mullins' filly out to lead rivals a merry Dance 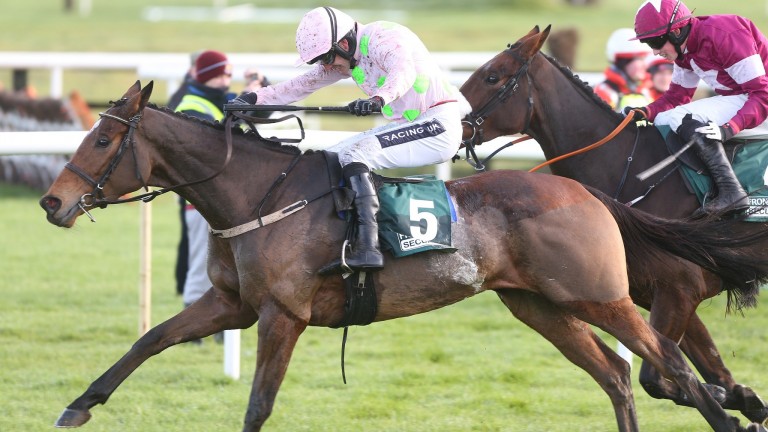 Let's Dance bids to win her third race on the spin in the Grade 3 contest at Leopardstown
CAROLINE NORRIS
1 of 1
By Brian Sheerin 6:00PM, DEC 28 2016

This race will always be special to Patrick Mullins as the champion amateur smashed the 97-year-old record number of winners recorded by an amateur aboard the Willie Mullins-trained Zuzka back in 2012.

While he does not have a ride in this year's renewal, Willie Mullins again holds the key, as the champion trainer runs both Let's Dance and Daisy's Gift.

Let’s Dance will be bidding to keep up the unrelenting pace set by Rich Ricci’s other runners thus far this Christmas. The four-year-old filly has strong juvenile form in the book from last season and recorded two commanding victories as an odds-on favorite this term.

Mullins' other runner in the race, Daisy's Gift, is reverting from fences – where her jumping was far from convincing – and this may be the confidence booster she needs.

Slowmotion is another filly stepping back from fences and a return to the form that saw her beat Rashaan by seven lengths at Fairyhouse in March would see her go close.

Her trainer, Joseph O’Brien, said: “Obviously her first run over fences did not go according to plan at all – she only got as far as the first. We are hoping that this will be a nice confidence booster for her and she looks to have a decent chance. She's in good form at home.”

Paul Nolan decided earlier in the week to side step the Paddy Power Chase with Solita in preference for today’s race and is hoping that decision is vindicated.

He said: “She will love the ground. We had her entered in the Paddy Power Chaser here on Tuesday but we decided against running her in that because I just felt she may not have had enough experience for such a big handicap, and it may have been a daunting task for her.

“We said we would hold out and declare her for this and I am happy we did that as, while the race looks strong, it has cut up a bit in terms of numbers. I think she will give a good account.”