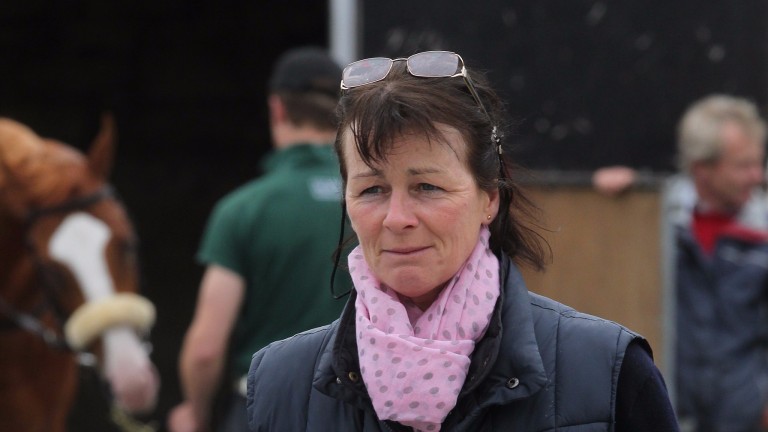 The best dish is being served last and no-one will be nipping off to the car park early as this four-year-old bumper is usually won by a smart performer.

Jockey Patrick Mullins has won two of the past three runnings and has outstanding claims of recording another aboard Cheltenham bumper runner-up Debuchet for his aunt Mags.

Mullins won a Leopardstown bumper on Debuchet on Irish Champion Hurdle day in January, after which the Force Eight Syndicate turned down plenty of good offers for the grey.

Joseph O’Brien sends impressive Leopardstown bumper scorer High Tide into battle. After leading home a 1-2-3 for the stable when winning by seven and a half lengths on his debut at the Foxrock track, the Montjeu gelding arrives here as a credible challenger to the likely favourite Debuchet.

You have to go back ten years to find the last newcomer (Caravino) to win this race. There are four unraced runners in the line-up.

Mags Mullins, trainer of Debuchet
We were charmed with how well he ran at Cheltenham and it was just a pity for us that Fayonagh flew home to get up and beat us. For a four-year-old he’s something else because he came home in great shape. I would like to think he has a good chance, but we'll see.

Joseph O'Brien, trainer of High Tide and Cornelius Sulla
Both are in very good form. High Tide came out of his win at Leopardstown in great shape and hopefully he can progress. It’s a good race and they might be up against it to beat Debuchet.

Peter Fahey, trainer of Coldamour
She won well at Thurles and we were expecting a nice run from her because she’s a nice filly. She didn’t disappoint us on the day and we were delighted she confirmed what we thought of her. She has been very well since Thurles and hopefully she can get some black type.

FIRST PUBLISHED 6:00PM, APR 5 2017
For a four-year-old, he’s something else, because he came home in great shape and has eaten up ever since. I would like to think he has a good chance