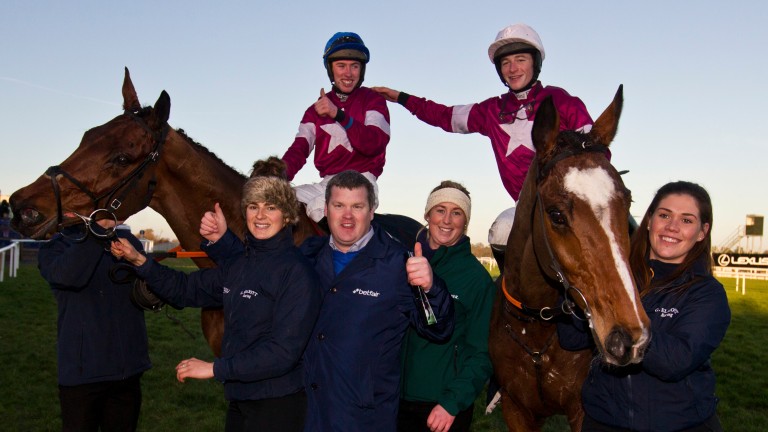 Don Poli will be ridden by David Mullins in the Stan James Irish Gold Cup
Patrick McCann
1 of 1
By Brian Sheerin 5:39PM, FEB 11 2017

David Mullins will bid to emulate the feat achieved by Ruby Walsh in 2012 by following up his success in the Irish Champion Hurdle with victory in Sunday’s Stan James Irish Gold Cup aboard the Gordon Elliott-trained Don Poli.

According to Gigginstown House Stud boss Eddie O’Leary, Mullins “got on great with Don Poli” when the pair ran out a narrow second behind Outlander in the Lexus Chase in December and confirmed he will keep the ride.

Gigginstown will also be represented by Elliott’s Empire Of Dirt and the Noel Meade-trained Road To Riches, who is set to wear cheekpieces for the first time, in Sunday’s showpiece.

O’Leary said: “Empire Of Dirt is not a ground dependent horse. We are looking forward to seeing how he gets on stepping out of handicap company. We'll know after Sunday whether he is a Gold Cup or a Ryanair horse.

“As for Road To Riches, he's in good form and he'll need to run a good race before we start thinking about Cheltenham. Hopefully he's come on for his run in the Lexus Chase.”

Leopardstown racecourse manager Pat Keogh is expecting the ground to be soft on Sunday and said: “We couldn’t be happier with the covering of grass that we have at this time of year. The ground will be soft but there's a very slight chance of the ground being slightly better, maybe yielding to soft on the chase track.”

Tom Ryan, Naas racecourse manager, is also expecting soft ground for their fixture on Saturday but will be keeping close tabs on the weather.

He said: “We're keeping an eye on the weather as we're expecting a cold snap over the next 48 hours but we don’t fear for racing. If anything, it’s just precautionary.

Joseph O’Brien is set to give the exciting West Coast Time his final start in the concluding bumper at Naas before making a decision on the five-year-old’s Champion Bumper participation at Cheltenham.

O’Brien said: “We were thrilled with him when he won at Cork and Naas will provide another good test for him. If he is to run at Cheltenham he will need to run very well on Saturday.”

FIRST PUBLISHED 6:09PM, FEB 9 2017
We will know after Sunday whether he's a Gold Cup horse or a Ryanair horse