Mullins: betting drift probe has so far revealed nothing untoward 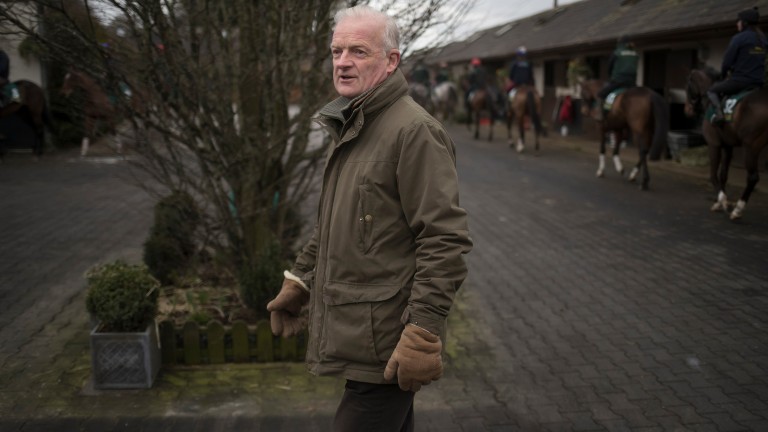 The Irish Horseracing Regulatory Board's investigation into market drifts on Willie Mullins-trained horses that were subsequently beaten at the Dublin Racing Festival is still to be completed but the champion trainer has reiterated that the regulator has so far found nothing untoward.

Yorkhill, Melon and Carter McKay all drifted noticeably shortly before the off in their respective Grade 1s at Leopardstown on February 3.

Each of the trio was well beaten, with Mullins' Min justifying market leadership in the Coral Dublin Chase in which Yorkhill capitulated on reverting to two miles.

The IHRB subsequently opened an inquiry on the basis of irregular betting patterns and has stated bookmakers and betting exchanges have been cooperative in providing information and data.

While IHRB chief executive Denis Egan has played down expectations of a sensational development, newspaper reports in recent days have again drawn attention to the matter by speculating that around €500,000 was laid on the three horses to lose minutes before the races began on the basis of inside information from the yard.

Mullins is not believed to be suspected of any wrongdoing and is not the subject of the IHRB investigation.

Speaking at his media day in advance of the Cheltenham Festival, he said on Monday: "The IHRB has held its investigation and told me it has found nothing untoward.

"When you have races with big markets like these there is a lot of activity. We'd have lots of horses that would go out in price and win as well – that's the nature of racing."

Take a sip of Ballybrit Lite, it won't taste the same but you might like it Finally! Excelcius produces excellent display to record only his second victory