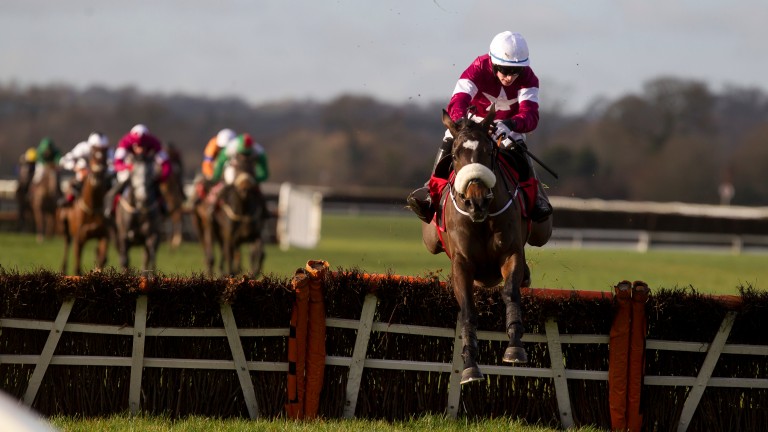 Dinaria Des Obeaux takes the step up to Grade 1 company after her easy win at Cork
Patrick McCann
1 of 1
By Brian Sheerin 6:30PM, FEB 11 2017

Since Our Conor ended an 11-year wait for an Irish-trained winner of the JCB Triumph Hurdle at Cheltenham in 2013 this has become the go-to race for top juvenile form.

Gordon Elliott will be keen to see if he has a Triumph contender on his hands in the shape of Dinaria Des Obeaux, who created a massive impression when destroying her rivals on debut at Cork in December. The Gigginstown-owned filly takes a deserved step up in class and, along with the Willie Mullins-trained Meri Devie, will benefit from a 7lb sex allowance.

It is significant Ruby Walsh has opted to ride Baupame over Meri Devie, while Barry Geraghty has chosen Housesofparliament over Sword Fighter and hurdles debutant Bhutan.

Willie Mullins, trainer of Bapaume and Meri Devie
Bapaume sets the standard in this having won a Grade 2 over the course and distance at Christmas. He's been in good form since and is a good, solid horse who jumps well. He looks to have an obvious chance. Meri Devie was impressive when winning by five lengths on her hurdling debut here at Christmas as well. She's a smart filly and the 7lb allowance will help. Even so, it'll be a tall order for her on only her second run.

Gordon Elliott, trainer of Mega Fortune and Dinaria Des Obeaux
We're putting cheekpieces on Mega Fortune for the first time and he'd like an ease in the ground, which I'm not sure he'll get. Dinaria Des Obeaux hosed up last time but it's hard to weigh up the form. She doesn't show a whole pile at home, but when we bring her away to work she always goes well. We're looking forward to a good run and the weight allowance will help.

FIRST PUBLISHED 6:00PM, FEB 11 2017
She doesn't show a whole pile at home, but when we bring her away to work she always goes well

Why the weight? Let's give our riders some respite and stop all the suffering 'I wish I came on the scene ten or 20 years ago when Willie wasn't around'