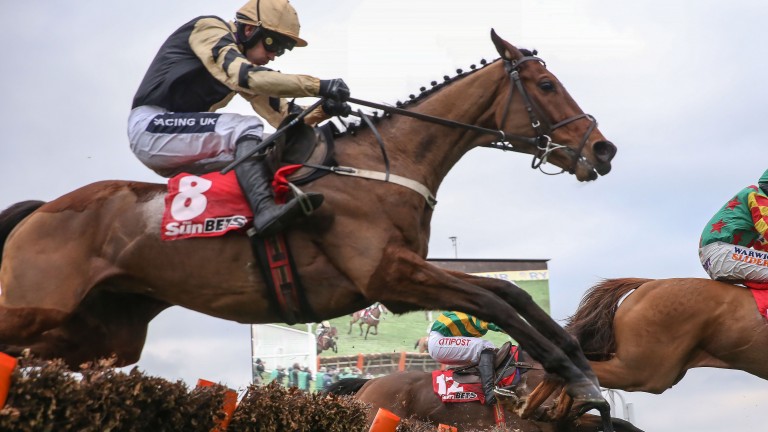 Nichols Canyon and Ruby Walsh on the way to winning the Stayers' Hurdle
GROSSICK RACING PHOTOGRAPHY 0771
1 of 1
By Richard Forristal 7:08PM, MAR 16 2017

Willie Mullins started the day having misfired in many of the Grade 1s he has farmed as a matter of routine, but such was the irrepressible momentum of his Thursday resurgence he even managed to plunder a first Stayers' Hurdle with Nichols Canyon.

Having come into the race with victories from Yorkhill in the JLT Novices' Chase and Un De Sceaux in the Ryanair Chase to their names, Mullins and Ruby Walsh would complete a wonderful four-timer with Let's Dance in the Trull House Stud Mares' Novices' Hurdle.

When you consider Mullins had suggested a little more than two weeks ago that the tenacious Nichols Canyon might not make Cheltenham owing to some lacklustre homework, the transformation in fortunes is even more remarkable.

Clearly, Walsh had seen enough from him in the last fortnight to discard both Shaneshill and Clondaw Warrior in this Sun Bets-backed three-mile feature.

"He had seven Grade 1s won," the rider said of the decision after adding to his four previous wins in the race aboard the mighty Big Buck's. "The others couldn't win a Grade 1 between them."

For once, it seems appropriate to lament that the Stayers' no longer carries the World Hurdle moniker. We like to think of Cheltenham as the centre of the world but, in this instance, the 'World' would not have been enough for Mullins, as he now plans to go global. 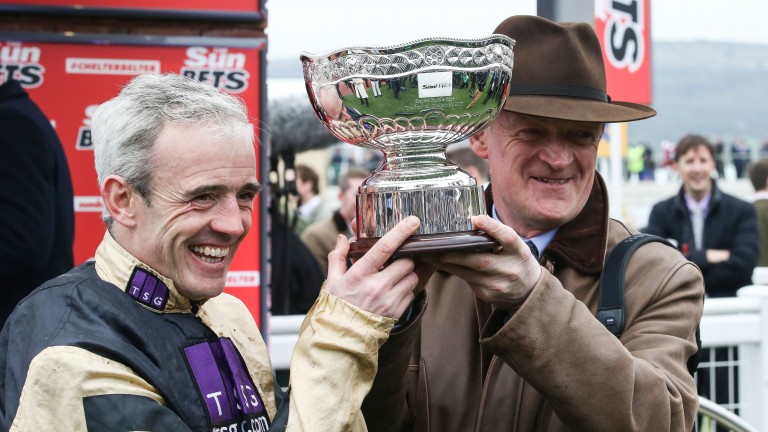 Prize guys: Walsh and Mullins after Stayers' Hurdle glory for Nichols Canyon
GROSSICK RACING PHOTOGRAPHY 0771
Last year, Nichols Canyon journeyed to Nashville for a first stab at three miles. He fell just short when third behind Rawnaq and stablemate Shaneshill in the Calvin Houghland Iroquis Hurdle, a $200,000 Grade 1 for which there is a $500,000 bonus that Nichols Canyon is now eligible for after landing Wednesday's £130,740 pot.

Shaneshill was pulled up here and fellow Closutton representative Clondaw Warrior finished an honourable sixth. However, Nichols Canyon stepped up to the plate to finally secure Mullins a second of the four traditional championship events at the festival.

"He's tough," Mullins said after a 12th Irish-trained winner of the week. "He always works a bit dead, so we changed his routine – you have to try something.

"He has that bit of class, so we reckoned if he fired on the day he could do it, but I wasn't coming here expecting him to win."

Owner Graham Wylie, who was completing a double on the card following Yorkhill's triumph, had won the race on three occasions with Inglis Drever and revealed Mullins suggested when he bought Nichols Canyon out of John Gosden's yard he might be a similar type of horse.

"We had that in the back of our minds and then we tried to make a Champion Hurdle horse out of him," Mullins said subsequently of the seven-year-old whose appetite for a battle certainly echoes Inglis Drever's grit.

"Things got mixed up a bit so then, as a last throw of the dice, we came back for this race. I think we'll stay at three miles now.

"We'll probably go to Punchestown and then do what we did last year and go to Nashville for Iroquois Hurdle. They produced fantastic ground there and it seemed to suit him." 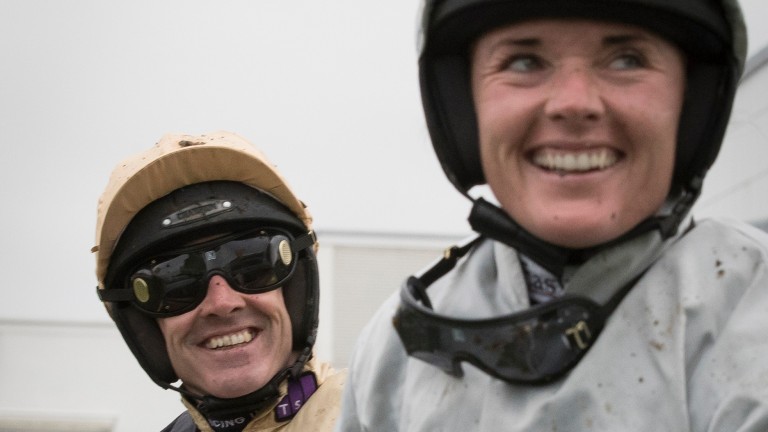 All smiles: Ruby Walsh looks over to sister Katie, who finished sixth to him in the Stayers' Hurdle on Clondaw Warrior
Patrick McCann
Given the mid-May date for the Iroquis Hurdle, Punchestown might yet be scratched from the agenda.

Walsh dropped in Nichols Canyon down the inside and brought him through quietly to challenge. Although the game Lil Rockerfeller still narrowly led over the final flight from Unowhatimeanharry, Nichols Canyon pinged it under Walsh, before finding plenty to overhaul both with a dogged stands' side surge.

"I went and had a cup of tea during the race because I thought, 'Three miles, I'll have time for a cup and enjoy it'," Mullins joked.

"Then I nearly dropped my tea coming to the last hurdle, but I thought, of all the horses in the world, he's going to come up every time, and he did. He just grinds it out – he's like Hurricane Fly in a battle in that respect."

Walsh added of the successful tactics: "I went down to the start with no great plan. Noel Fehily was on the favourite so I said I'd follow him, he's bound to bring me into the race. My fellow found loads, but he always does. He's a little warrior."

Still the only horse to defeat Faugheen, but often in the shadow of he and Annie Power, Nichols Canyon seems finally to have found his niche.

He was quoted as low as 4-1 to defend his crown in 2018 and go a little further in the quest to emulate his owner's other terrier-like Stayers' hero.