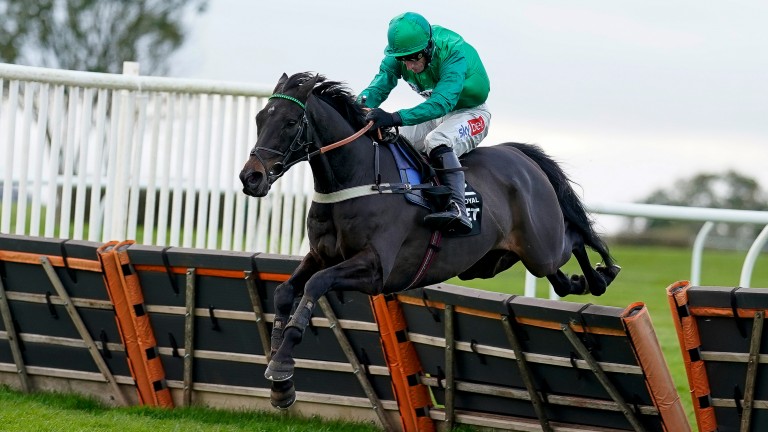 Daryl Jacob says Sceau Royal faces a tough task to reverse last year's form with Epatante in the Betfair Fighting Fifth on Saturday but he is relishing the challenge with the consistent nine-year-old.

The admirably versatile Sceau Royal, who has won 16 of his 40 starts, has shown his best form on good ground, including when becoming a three-time Elite Hurdle winner at Wincanton last month.

He is on course to clash with last year's winner Epatante again after the pair appeared among seven horses to go forward on Monday. Epatante disappointed last season following her Newcastle victory but trainer Nicky Henderson believes she is back to her best after undergoing back surgery this summer.

Sceau Royal was four and a quarter lengths adrift in the Grade 1 last year on ground described as good, but has shown himself to be in top form with back-to-back wins this season.

He won a Listed contest from Silver Streak on his first start of the campaign before following up in the Elite Hurdle by five and a half lengths for trainer Alan King, who has yet to win the Fighting Fifth.

"He's very consistent and is in very good form – he's a joy to ride," said Jacob, who has partnered Sceau Royal in all but five of his starts in Britain. "It's been a dry month and I don't think the ground will be a problem. Epatante is a very good mare and we'll be trying to beat her, but whether we're good enough, we'll find out on Saturday."

The 2020 Champion Hurdle winner Epatante, who was last seen finishing third in last season's running, was made the sponsor's 4-5 favourite with Monmiral next best at 3-1 and Sceau Royal a 5-1 shot.

Monmiral, who won the Grade 1 juvenile hurdle at Aintree in April, could bid to extend his unbeaten record to five for trainer Paul Nicholls, who last won the Fighting Fifth with Irving in 2014.

He is joined among the other entries by Silver Streak, winner of last year's Grade 1 Christmas Hurdle, Not So Sleepy, Belfast Banter and Voix Du Reve, who ended last season running in handicap chases.

The ground was described as good at Newcastle on Monday and course officials will monitor the forecast before making a decision on whether to water later in the week.

"It's one of those 'damned if you, damned if you don't' dilemmas," said clerk of the course James Armstrong. "We're dry all week up to Thursday and then we might see rain on Friday into Saturday when they're talking about a couple of millimetres on Friday and up to 15mm on Saturday, which would obviously create a change in the going.

"The home straight is marginally quicker than the rest of the course and we'll be tempted to give that a bit of water and we'll just have to monitor the forecast later in the week to decide whether we need to put more on."

What's on this week: high-grade action builds up to Ladbrokes Trophy

FIRST PUBLISHED 1:45PM, NOV 22 2021
Epatante is a very good mare and we'll be trying to beat her, but whether we're good enough, we'll find out on Saturday

Envoi Allen could drop in trip for Christmas Grade 1 after Punchestown defeat 'I'm optimistic he'll run a big race' - Smith bullish for Racing Post Gold Cup Ferny Hollow flies to head of Arkle market as Mullins defends cautious approach What did we learn from an attritional John Durkan Chase? Easy return for Energumene as Champion Chase contender strolls home in Hilly Way Gutsy Allaho 'not at his best' but makes all to land gruelling John Durkan