Mullins and a defiant Walsh get the fightback under way 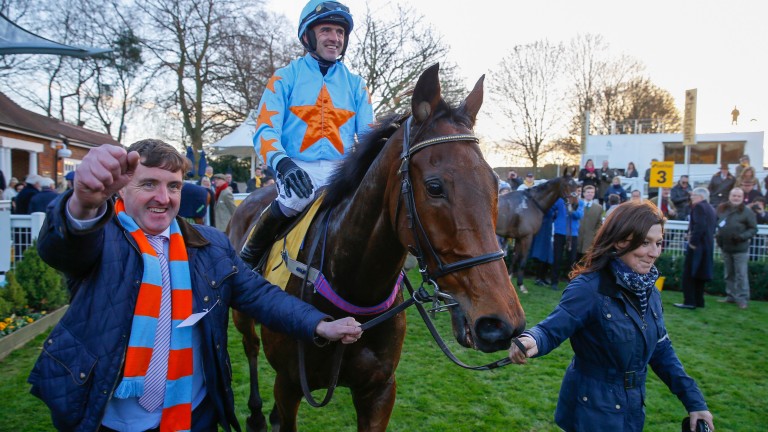 Un De Sceaux and Ruby Walsh are led back in after the Tingle Creek
Mark Cranham
1 of 1
By Bruce Jackson and David Jennings 12:57PM, DEC 4 2016

The most dangerous Grade 1 outfit in either Britain or Ireland struck at the first time of asking in Britain this season when Un De Sceaux took full advantage of the retirement of his old nemesis Sprinter Sacre to win the Betfair Tingle Creek, giving Willie Mullins a welcome big-race winner at the end of a turbulent and testing few weeks.

The thrilling victory over former Champion Chase winner Sire De Grugy certainly put a broad smile on the face of Ruby Walsh, who performed a celebration of Cheltenham Festival proportions after the epic duel that denied Sire De Grugy a third win in the Grade 1.

Still smiling later, he followed up with a warning for the British press and punters that the close-knit team at the Closutton yard were using the negative to steel their determination to prove doubters wrong.

"It is great when you write us off," said Walsh. "The more you p*** us off the more we'll fight back. Tomorrow is another big day and I'm riding the right horses to win the right races.

Watching on from Fairyhouse, the usually phlegmatic Mullins admitted this season had tested his cool, as he said: "Any day you win a Grade 1 is great and it's a relief as well. You're always under pressure in this game." 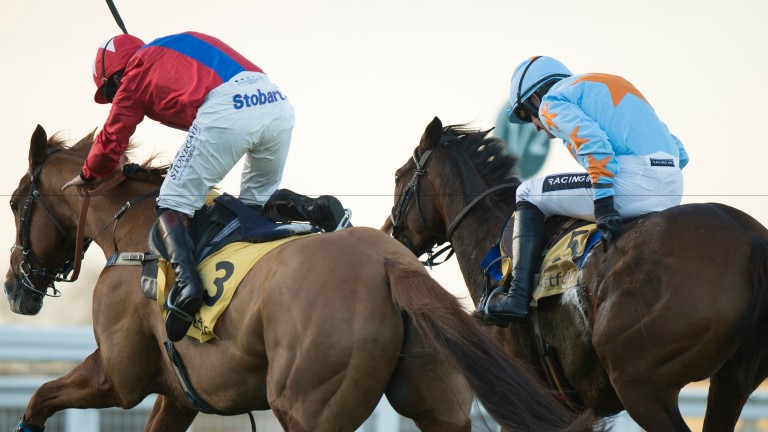 Un De Sceaux and Ruby Walsh (right) battle for supremacy with Sire De Grugy and Jamie Moore in the Tingle Creek
Edward Whitaker
Mullins has taken a few body blows with Gigginstown House Stud removing 60 horses in a row over training fees, superstar Vautour succumbing to an injury at home and Avant Tout being fatally injured in a race, and it has been felt keenly.

This week Mullins also become the subject of some punters' frustration after he left Douvan as well as Un De Sceaux in the Tingle Creek, not deciding which would run until declarations on Thursday revealed no Douvan. The missing star had been the subject of a rapid price contraction earlier in the week, when he went from 5-1 to 4-7 in the space of an hour.

Colm O'Connell, son of owners Edward and Catherine who watched at home in Ireland, revealed Mullins told him the family's star was running only at declaration time on Thursday.

'Biggest day of my life'

"This is the biggest day of my life and all credit to Willie, Ruby and Virgine [the winner's groom]," he said. "We pay the bills, that's our only involvement. I rang Aer Lingus immediately and took their last 24 seats for family and friends to come over."

Mullins was happy he had made the right choice for Sandown, adding: "It's just what I thought might be needed for a race like the Tingle Creek: a real battle-hardened horse, and that is what Un De Sceaux is.

"He needed to be everything that he is to stay in front, especially with two untidy jumps at the last two fences, but he dug very deep. He can do that. For a race like the Tingle Creek I thought Un De Sceaux would be better equipped than Douvan.

"I told Ruby just to do whatever he thought might work because he knew the opposition way better than I did. He settled him and the horse is settling better now with age and will get a much longer trip now too."

Last time Mullins had runners at Sandown it was on the final day of the last jumps season, when Paul Nicholls narrowly pipped his rival to the post on a fascinating day.

This season, by contrast, has begun with many questioning whether Gordon Elliott is poised to challenge Mullins for his once-untouchable domestic crown.

Saturday's Tingle Creek victory does not count towards the domestic title, and it may not be a foundation for another bid for the British title, but it was a timely reminder that it takes more than a few rough weeks to topple a trainer like Willie Mullins.