Much good Cheltenham Festival banter on a relaxed evening in Athlone 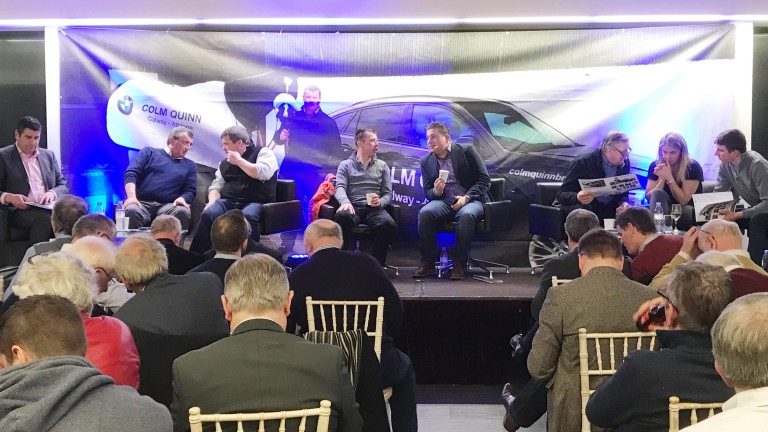 The panel gets to grips with the Cheltenahm Festival in Colm Quinn's showrooms, Athlone
1 of 1
UPDATED 10:40AM, MAR 9 2018

The venue was certainly different, as more than 300 people meant more than a full house at the spacious Colm Quinn showrooms on the outskirts of Athlone. Indeed, for a preview night supposed to kick off at 8pm, they were bringing out extra chairs for latecomers at 8.20.

The format was different too. Led by former Offaly hurling great Michael Duignan, whose knowledge of racing would not really have been known to a wider audience, it represented more of a fireside chat. With no videos of trial races and no bookmakers' representatives taking up half the night with their enhancements, it was quite refreshing too, although it did lead to some taking the mic more than others.

There was banter too, between the Racing Post's David Jennings and Gigginstown's Eddie O'Leary, with Jennings describing O'Leary as “the most pessimistic man in the world”. At one point, Duignan suggested  the two had a love-hate relationship. “Yeah, I love him and he hates me,” quipped Jennings.

Unanimity was hard to come across. A lot of the conversation about the Champion Hurdle did not centre around Buveur D'Air but around Yorkhill, with one or two of the panellists suggesting that if Ruby Walsh took the ride the horse had a big chance. That was tempered, though, by Noel Meade's comment that "if Yorkhill wins that I'll give up”.

Elliott was in excellent form all night. He reiterated the possibility of Samcro being diverted to the Sky Bet Supreme Novices' Hurdle should the ground turn heavy, which led to the first of many back-and-forths about who would make the decision. “Eddie,” said Gordon. “Gordon,” said Eddie.

There seemed to be a consensus that Altior had the Queen Mother Champion Chase in the bag. “He's a good thing,” said Andrew Lynch. The suggestion of Douvan winning the race received an unenthusiastic response, with a couple of the panellists believing the more negative dispatches provided by David Casey at a couple of recent preview nights.

“The only thing I know about the Gold Cup is that I don't know what's going to win it,” said Jennings, and it seemed to sum up the general feeling. 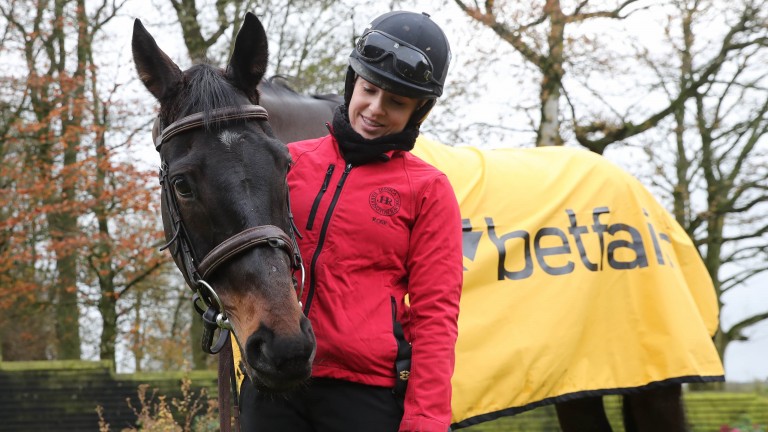 Shall we invite Gordon to the party this time?" Kate Harrington with Sizing John
JOHN GROSSICK (RACINGPOST.COM/PHOTOS)

Kate Harrington, though, was bullish about the chances of both Sizing John and Our Duke after recent work. Elliott said: “I hope Road To Respect wins for Noel Meade, because I know he'll throw the bigger party!”

Harrington responded: “Well, you must have missed the big party in Castledermot the Sunday after the Gold Cup last year,” only to prompt a swift: “Yeah, but I wasn't invited to that one Kate!”

Even the naps for the meeting were not exactly set in stone. Donagh Meyler was quiet for most of the evening – seemingly because he was furthest away from the MC in trap eight – but he did offer the interesting nap of the week of Gordon Elliott saddling the first three home in the Glenfarclas Cross Country Chase!

It summed up an interesting evening.

New measures can ensure they are all well looked after Top owners Simon Munir and Isaac Souede remove horses from Gordon Elliott's yard Owner horrified to learn Kiss Me Kayf was sent to English abattoir Henderson: racing must heed Panorama warning over traceability of retired horses Panorama to allege ex-Elliott horses were sent to UK abattoir