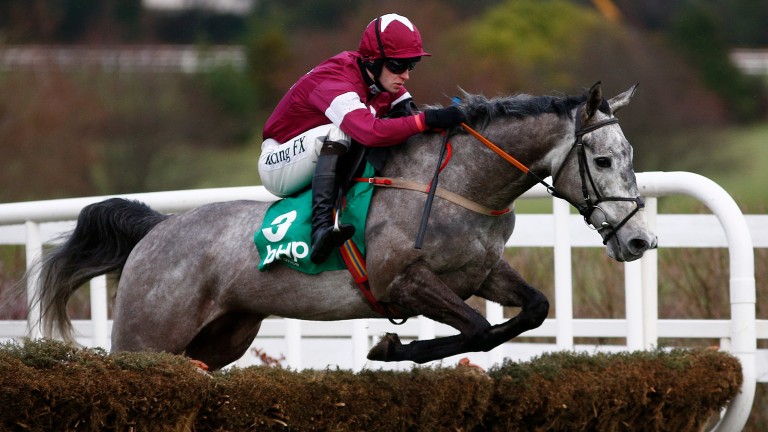 Petit Mouchoir: enhanced his Champion Hurdle claims but his RPR leaves him below a typical winner of the race
Alan Crowhurst
1 of 1
By Steve Mason 6:27PM, JAN 30 2017

He may have been eased in the Gold Cup betting following his narrow defeat by the gallant Many Clouds (174) in Saturday's Grade 2 Cotswold Chase, but Thistlecrack still looks the one to beat on March 17.

A series of minor errors didn't help his cause, but an RPR of 174 is not that far shy of his King George winning mark of 178 and, granted decent ground, there is no reason to think he can't better that figure in March. He certainly seemed to get up the hill well enough and given that Saturday's race was reportedly run over 172 yards further than advertised and in a winning time over six seconds slower than last year's Gold Cup, it's hard to see him failing for want of stamina.

Earlier in the week, Thyestes Chase winner Champagne West (170) had put himself on the fringes of the Gold Cup market and stablemate Petit Mouchoir (165+) continued the yard's good form by landing Sunday's Irish Champion Hurdle.

His rating still leaves him below the level of a typical winner of the Champion Hurdle but, with the exception of Faugheen (177), there is a lack of real quality in the division.

Clarence House Chase winner Un De Sceaux (174) cemented his position at the head of the Ryanair Chase market, but just as interesting was the performance of Uxizandre (168) on his first run since landing that festival race in 2015. On better ground the placings could easily be reversed.

Among the novice Grade 2 winners Wholestone (147) and Constantine Bay (147) ran sound Albert Bartlett Trials, but probably more significant as far as that race is concerned was the rating earned by West Approach (157) behind Unowhatimeanharry (167) in the Cleeve Hurdle. Of the twelve winners of this relatively new race, only 2006 scorer Black Jack Ketchum (159) has won the race with a figure in excess of 157.

Back at Leopardstown the mare Let's Dance (146) confirmed she will be a factor at the festival, although her target race is still not clear. Stablemate Melon (138+) had kicked off the card with a stylish debut success and should be a player in the Supreme Novices' Hurdle.

Pick of the novice chase performances over the weekend was Royal Vacation (155), although his new mark is still a fair way shy of that of an average RSA winner (163). Perhaps of more significance was the huge compliment he paid to Might Bite (165+) who had looked set to beat him by upwards of 15 lengths when crashing out at the last at Kempton on Boxing Day.

FIRST PUBLISHED 5:23PM, JAN 30 2017
His rating still leaves him below the level of a typical winner of the Champion Hurdle but, with the exception of Faugheen (177), there's a lack of real quality in the division