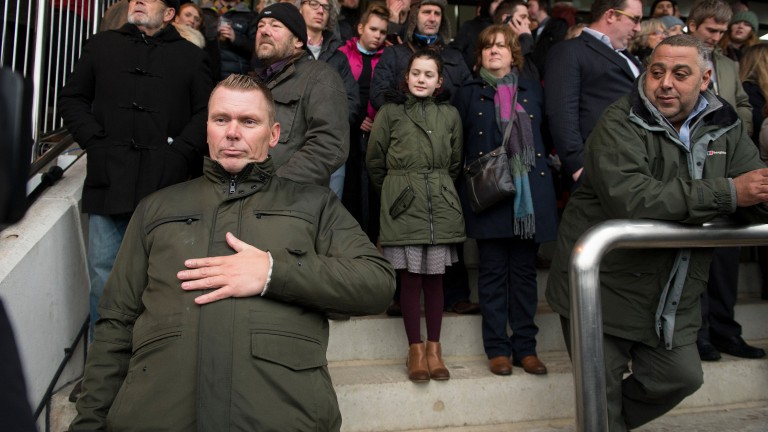 Racing fans hoping to silence loudmouth pundit Matt Chapman will have their wishes granted as part of an At The Races fundraising initiative – the Voice Of Racing Project.

ATR, in partnership with the Racing Post and The Irish Field, are backing an action-packed day of entertainment on Friday, and the three charities chosen to benefit this year are The Sir Peter O’Sullevan Charitable Trust along with the UK and Irish Injured Jockeys Funds.

Chapman will be at Doncaster’s meeting on Friday afternoon and at Newcastle in the evening and, although being silent is his worst nightmare, the loudest man on television has accepted the challenge of a sponsored silence in order to raise some much needed funds for the three charities.

While still allowed to speak, he told the Racing Post: “The main thing is to raise as much money as possible for these great causes and, if me saying nothing helps, I'm more than willing to shut up – it’s not going to be easy for someone who usually has a lot to say, but I assure everyone I'll do it.

“It’s a fantastic idea set in motion by ATR and supported by the Racing Post and The Irish Field and I'll be playing my part in raising as much money as possible. The plan is for me to be at Doncaster in the afternoon and then on to Newcastle, where I may do something on stage with UB40, who're in concert at the end of the evening.”

Chapman added: “I'm really looking forward to the whole day as I have had a bit of success for charities – with Freddy Tylicki and Sally Bethell.

"It’s something that's close to my heart and, though not opening my mouth is never easy as everyone knows, it'll be the sound of silence which will prove the order of the day.”

However, the day is not all about Chapman as other ATR presenters will take part in fundraising challenges with Luke Harvey and Jason Weaver taking on tongue-twisting live commentaries from Yarmouth and Mick Fitzgerald will be with special guests at the Injured Jockeys Fund’s Oaksey House in Lambourn throughout the day.

All funds raised on the day and up until midnight November 23, the date of the annual Sir Peter O’Sullevan Award Lunch, will be divided between the charities with 50 per cent going to the Trust and 25 per cent each to the Injured Jockeys Funds.

Racing fans are encouraged to pledge donations throughout the day. Donations can be made online through the Just Giving website at attheraces.com/voiceofracing.

UK donors (excludes Isle of Man and Channel Islands) can also donate by texting VORD99 followed by the amount they wish to donate to 70070 (for example, to donate £10 just text “VORD99 £10”). All donations can be made up to midnight on November 23.

An online charity auction has been attracting strong interest this week, with sports fans able to bid for a number of unique lots until Sunday at 10pm. Items up for grabs include Prince Khalid Abdullah silks signed by the late Sir Henry Cecil and Tom Queally. Bidding is available here: https://www.givergy.com/charity/voice-of-racing