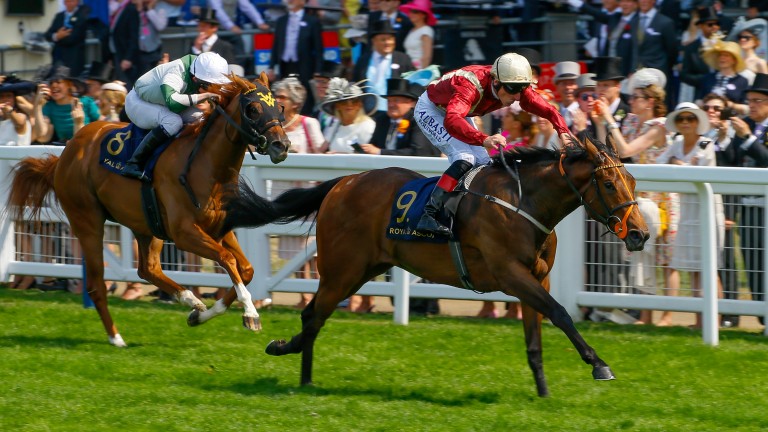 Heartache: Royal Ascot winner has the Commonwealth Cup on her agenda
Mark Cranham
1 of 1
By Bruce Jackson 7:59PM, JUL 20 2017

Heartache seems to have scared away her rivals in France on Sunday as only five have stood their ground against the Queen Mary winner in the Group 2 Prix Robert Papin.

July Stakes winner Cardsharp, National Stakes winner Havana Grey and Godolphin's Roussel have been taken out, but there is a surprise rival to Heartache in De Bruyne Horse, who had been expected to run in the Weatherbys Super Sprint at Newbury on Saturday.

Heartache will have a new partner in Gerald Mosse, as her Royal Ascot rider Adam Kirby cannot make the 8st 12lb she will carry. She gets a sex allowance in the 5½f feature and does not have a penalty for winning a Group 2.

Sam Hoskins, racing manager of Heartache's owners The Hot To Trot Syndicate, said: “It's a shame Adam can’t do the weight, but Gerald rides a lot for Clive Cox and he has plenty of local knowledge.

'Scared of our filly'

"It's exciting to hear other connections talking about being scared of our filly. Clive says she's done very well physically since Ascot and if she's going to get six furlongs going forward this is a nice step in between."

Heartache is entered in the Lowther at York next month, when she would have a Group 2 penalty, and Hoskins added: "If she didn't stay there would be the Flying Childers but if she does then the big aim would be the Cheveley Park at the end of the season."

Nearly half the syndicate are decamping to Maisons-Laffitte on Sunday with 30 lunching at the track, where there will be no talk of their filly's value as the syndicate lease Heartache from her breeder Whitsbury Manor Stud.

There could be more British than locals at Maisons-Laffitte after Middleham Park Racing's late decision to roll the dice in the Group 2 with De Bruyne Horse rather than against 24 rivals at Newbury. Christophe Soumillon has been booked to ride. 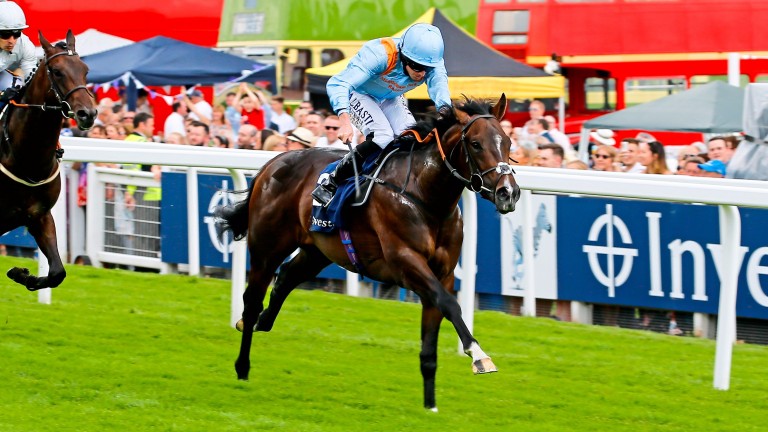 De Bruyne Horse: a late change of mind means he will run in the Papin
Mark Cranham

Tim Palin, MPR's founder, said: "Even on Tuesday we were going to Newbury, but talking to our other trainers we sensed the Papin would cut up.

"Even so, it was a very close call which way we went and the decision wasn't made until 9.30am [on Thursday]."

He added: "Heartache looks the standout horse in the race and will probably win, but we won the race with Kool Kompany three years ago and if we are second or third we'd be absolutely thrilled."

He said of the change of target: "It wouldn't have been playing at home for him over the fast five at Newbury, whereas the slightly longer trip on possibly softer ground will be better for him.

'Surprised if draw makes a difference'

"He could have won the Super Sprint on his side and still been only fourth or fifth overall, but I'd be surprised if the draw makes any difference in the Papin."

Karl Burke, who had Havana Grey among the 16 original entries, relies instead on Unfortunately, who was beaten a head in a Listed race at the track last month.

Tom Dascombe sends National Stakes runner-up Frozen Angel after his fourth in the Norfolk Stakes at Royal Ascot for his footballer owners headed by Michael Owen.

A win for either Heartache or De Bruyne Horse would continue the stranglehold their trainers have on the race, with Cox and Hannon equal with two each from the last five runnings.

FIRST PUBLISHED 12:20PM, JUL 20 2017
It's a shame Adam can’t do the weight but Gerald rides a lot for Clive and he has plenty of local knowledge