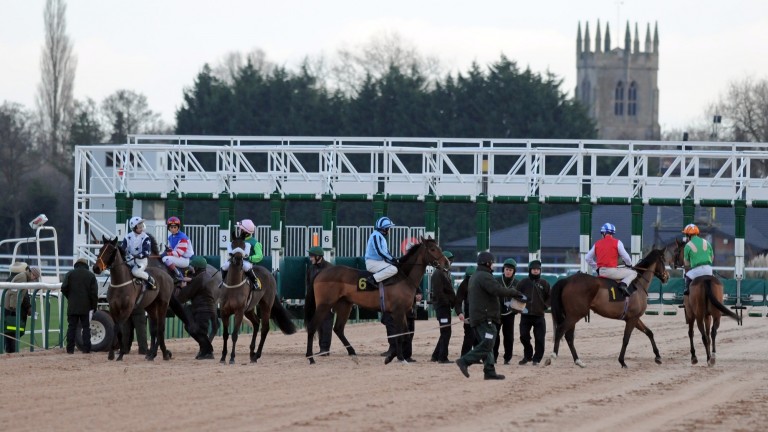 Southwell: heavy rain proved too much for the all-weather track to contend with
1 of 1
By Lewis Porteous 3:48PM, NOV 22 2016

Trainer Hughie Morrison has vented his frustration after Southwell’s Fibresand track failed to cope with heavy rainfall, leading to standing water on the track and the cancellation of Tuesday's meeting.

Officials first raised concerns on Monday evening, and the surface was deemed unraceable on Tuesday morning following 49mm of rain in the previous 36 hours.

“It’s disappointing an all-weather track can’t absorb that much rain, especially in light of the expenditure on the course, which was supposed to alleviate the problem,” said Morrison, who was set to run Pastoral Music in the 1m4f handicap and Affair in the 7f claimer.

He added: “Have Southwell really got an all-weather track? They’re racing over jumps at Lingfield after 60mm over the past three days. Southwell have got a problem and it’s disappointing having spent all that money.”

That monetary reference was to work recently carried out at the track. Racing returned to the all-weather at Southwell this month following a summer break, with work having been undertaken to address drainage issues on the bend after the winning post, while areas of the Fibresand surface were relaid to bring it up to date. Work on a wider flood defence to safeguard the future of the racecourse is ongoing.

Explaining the cancellation, clerk of the course Roderick Duncan said: “It just didn’t stop raining. It was really persistent for 36 hours without any kind of break at all and it’s just overburdened the drainage in some areas of the track.

"Even if we’d had a break in the rain it would have been difficult to get a consistent surface – that was our main concern.”

Similar amounts of rain would previously have left the course flooded, according to Duncan, who praised the flood-defence work undertaken so far.

He said: “When we’ve had similar amounts like that the whole place has gone under, so credit to the engineers. That’s why it’s difficult to draw precedents [with this situation].”

Asked if there was any correlation between the waterlogging and the part of the track recently resurfaced, Duncan added: “It’s nothing to do with that, it’s just a serious volume of rain in a very short time.”

Southwell’s upcoming meeting next Tuesday is over jumps on the turf track, which was also waterlogged in places yesterday but is expected to recover in time.

Duncan added: “It’s a predominately dry forecast beyond the weekend, so we think things will return back to some form of normality if the forecast is correct.

“We’ll turn the Fibresand over, let it dry out and then put it back. We'd hope to get it back to 'standard' by the next meeting on December 6.”

FIRST PUBLISHED 3:46PM, NOV 22 2016
It's disappointing an all-weather track can't absorb that much rain, especially in light of the expenditure on the course