Morrison back in search of more staying gold with duo 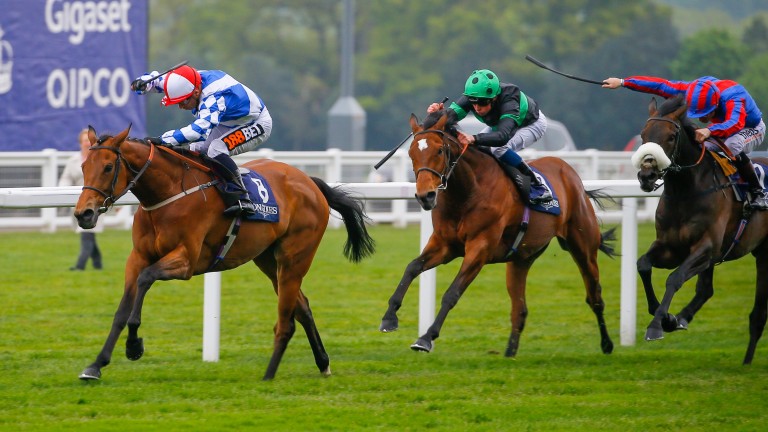 Sweet Selection is one of two chances for Hughie Morrison in the Prix Maurice de Nieuil
Mark Cranham
1 of 1
By Scott Burton 6:00PM, JUL 13 2017

Hughie Morrison is enjoying a fine season with his long distance specialists and saddles Marmelo, partnered by Christophe Soumillon, and the Olivier Peslier-ridden Sweet Selection in the Group 2 Prix Maurice de Nieuil (8.00pm) over a mile and six furlongs.

Marmelo has already shown his liking for France, most recently scoring at Group 3 level under a fine ride from Soumillon in the Prix de Barbeville, before finishing a close-up fifth in the Yorkshire Cup.

Sweet Selection failed to get involved at the business end of the Gold Cup but had previously scored over two miles in the Sagaro Stakes at Ascot.

"I think Sweet Selection possibly looked after herself at Ascot," said Morrison. "She didn’t travel as well as she did in the Sagaro but she seems in good form. We would love some soft ground for Marmelo."

The Andre Fabre-trained Talismanic is stepped up in trip for the first time, while the Italian-trained Full Drago brings excellent mile and a half form but shoulders a 3lb penalty.

Earlier on the card, Archie Watson saddles his second career runner in France when Ghost Serge lines up against six rivals in the Listed Prix Roland de Chambure (5.15pm) over seven furlongs.

"Carrying a 7lb penalty last time against what was probably not a bad field when he was clearly crying out for a step up to seven furlongs was a very good performance," said Watson.

"The alternative was the Superlative at Newmarket and, in terms of progressing through the ranks, we thought the Listed race was the way to go. All ground comes alike to him and he'll certainly get through it if there is still some cut."

FIRST PUBLISHED 6:00PM, JUL 13 2017
Carrying a 7lb penalty last time when he was clearly crying out for a step up to seven furlongs was a very good performance