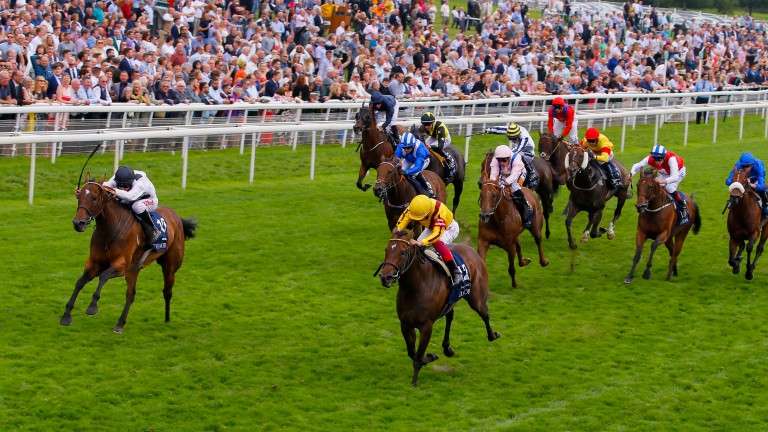 A big seven days for jockey Luke Morris did not begin quite so auspiciously as he hoped it might, but Britain's busiest jockey is already looking ahead to partnering his dual Group 1-winning sprinter Marsha and talented juvenile Corinthia Knight at Del Mar on Saturday.

Morris, who has clocked up almost 200 rides more than his closest pursuer, Silvestre de Sousa, in the busiest-jockey stakes, passed the 150-winner mark with a hat-trick at Wolverhampton on Saturday  evening but was unable to add a Group 1 victory to his laurels on Sunday, when third on the Archie Watson-trained Absolute Blast at the Capannelle in Italy.

Monday is a rare day off before he flies to California, where he believes the Sir Mark Prescott-trained Nunthorpe Stakes winner Marsha has a great chance in the Breeders' Cup Turf Sprint and that Absolute Blast's stablemate Corinthia Knight is a live contender in a $200,000 contest on the undercard.

It will be the first time Morris has race-ridden in the United States, but he has plenty of experience riding track work in California and is undaunted.

Morris said on Sunday: "I fly out on Tuesday and I'll ride track work on Wednesday. I think Marsha has a massive chance, and Corinthia Knight has a chance too as fast ground and a tight circuit will suit him well."

Marsha faces Lady Aurelia for a third time in five months, with the score one-all. Wesley Ward's dual Royal Ascot winner is blisteringly fast and enjoys home advantage this time so it is not surprising she is odds-on in places, with Marsha available at as big as 11-2. However, Morris fancies his chances on Elite Racing's brilliant standard-bearer.

He said: "Lady Aurelia beat us at Ascot, then we beat her at York of course, and so this is the decider.

"Track position will play a big part, but if Marsha gets a nice draw she has every chance of beating Lady Aurelia again. She's arrived in good shape and the ground is going to be much more to her liking than when she ran in the Abbaye last time."

He added: "I've never ridden competitively in America, but I spent three months in California with Ben Cecil when I was claiming 5lb about eight years ago, riding track work at both Hollywood Park and Santa Anita. I really enjoyed it and it was very valuable experience."

FIRST PUBLISHED 7:15PM, OCT 29 2017
Track position will play a big part, but if Marsha gets a nice draw I think she has every chance of beating Lady Aurelia again