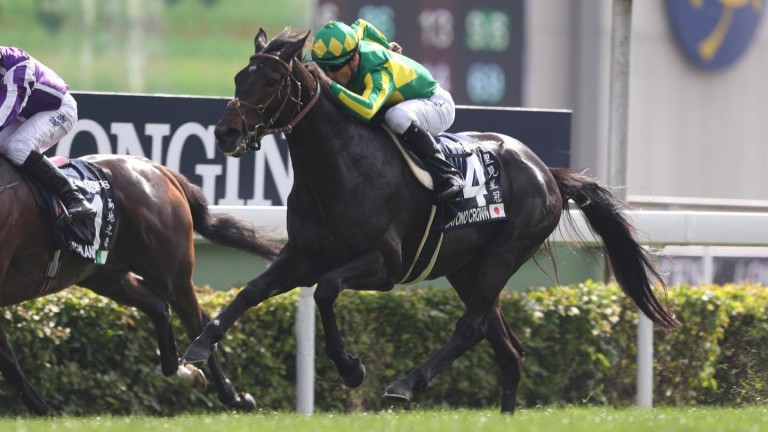 Highland Reel came agonisingly close to a second successive win in the Longines Hong Kong Vase on Sunday, but a late surge by Satono Crown and Joao Moreira snatched the prize for Japan.

Though it had been intended that the other challenger from the British Isles, Big Orange, would make the early running, Ryan Moore on Highland Reel was in front at the first bend and soon saw off the attentions of Big Orange, who was moved up to challenge just before halfway.

Moore kicked turning into the straight on the 1-2 favourite and briefly looked in full command. However, Moreira soon burst from the pack on Satono Crown and steadily wore down the lead, getting there with 20 metres to go and prevailing by half a length.

Any temptation to say that Moore went too soon was refuted by the gap back to third-placed One Foot In Heaven, who only got the nod to run at the eleventh hour. He was beaten a further six and three-quarter lengths. Highland Reel had pulled away from him and the others all the way to the line.

Moreira said: "I knew I had a lot of horse underneath. The way he won today he showed he has a lot of talent. He beat a world class horse in Highland Reel and to be his rider today is a blessing.

"I was always confident I would get there. I was behind a horse that was taking me back rather than into the race, so I switched to follow Maxime Guyon [on Silverwave]. Once I got on the outside and had a clear run I could tell he was full of himself and he was going to bash down. I think he would have won with any other rider on top."

Trainer Aidan O'Brien said of the runner-up, who has run in six different racing jurisdictions this year, winning the King George at Ascot and the Breeders' Cup Turf: "I'm delighted, he ran his heart out."

FIRST PUBLISHED 7:26AM, DEC 11 2016
I knew I had a lot of horse underneath. He beat a world class horse in Highland Reel and to be his rider today is a blessing