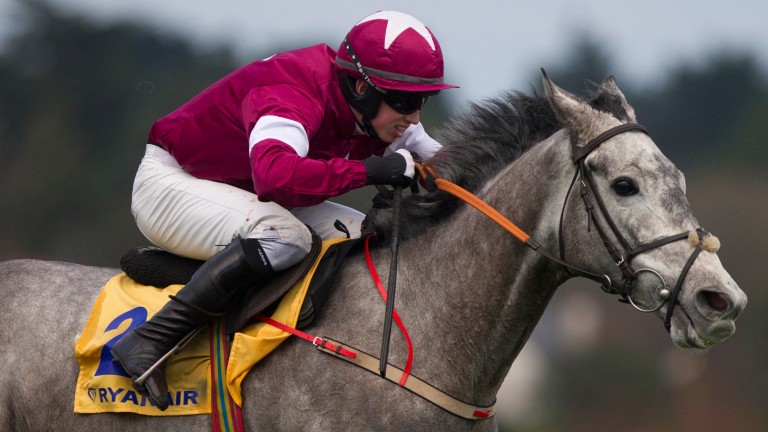 Bryan Cooper: seen here winning on Petit Mouchoir in the Ryanair Hurdle, could be out of action for eight weeks with a broken pelvis
Patrick McCann
1 of 1
By David Jennings 2:44PM, JAN 1 2017

Bryan Cooper could be out of action for up to eight weeks after breaking his pelvis at Punchestown on Saturday.

Gigginstown's number-one jockey should be recalling 2016 with fondness following a Cheltenham Gold Cup triumph on Don Cossack, but instead Cooper will be thrilled to see the back of it as a broken pelvis is the latest in a long line of injury woes.

The second half of 2016 has certainly been a tale of woe for Cooper. Tiger Roll left him with a laceration of his liver and a partially collapsed lung after he sent him crashing into the take-off board of the final fence at Galway in July, while he fractured his right arm at Fairyhouse in early October following a fall from Ball D'Arc. That kept him out of action for more than a month.

Cooper's latest injury, which is expected to keep him on the sidelines for six to eight weeks according to Turf Club medical officer Dr Adrian McGoldrick, arrived in the opening 3m1f beginners' chase at Punchestown as Arkwrisht made a mess of the fifth-last and sent him crashing to the turf.

In Cooper's absence, 17-year-old Jack Kennedy – who guided Outlander to glory in the Lexus Chase at Leopardstown on Wednesday – is likely to come in for more opportunities.

FIRST PUBLISHED 7:27PM, DEC 31 2016
Gigginstown's number one should be recalling 2016 with fondness following a Cheltenham Gold Cup triumph on Don Cossack, but instead Cooper will be thrilled to see the back of it