More To Read STORY OF THE HORSE

Smad Place's career in the words of those closest to him

Smad Place and Wayne Hutchinson jump the final fence to score at Kempton
Edward Whitaker
1 of 1
By Jon Lees UPDATED 11:57AM, JAN 31 2018

Peter and Trish Andrews have owned enough horses to know there is no guaranteed return on investment, whatever the sums involved. But in five years Smad Place has ticked nearly every box for them. Yes, the big prize has proved frustratingly elusive but for a modest outlay he has won six times, earned £230,000 in prize-money and taken them to five Cheltenham Festivals in a row.

For his next assignment he will attempt to add the prestige victory that is so far missing from his record when he tackles the Hennessy Gold Cup at Newbury on Saturday. It is a challenge that would have appeared somewhat optimistic when he first joined trainer Alan King in the summer of 2010.

EARLY SURPRISE
Peter Andrews, owner We’d been on the lookout for another horse and Anthony Bromley had been scouting for us. I watched a dvd of Smad running in France in a decent race in which he came second and I liked his attitude. I thought he had a real engine and was a trier. You wouldn’t have bought him on looks but the other attributes are very important. He wasn’t silly money, so we bought him. I think he cost us about €28,000.

Alan King, trainer We bought him in July as a three-year-old. He’d had two runs on the Flat, not showing a great deal, and then two runs over hurdles, finishing second in his second race. 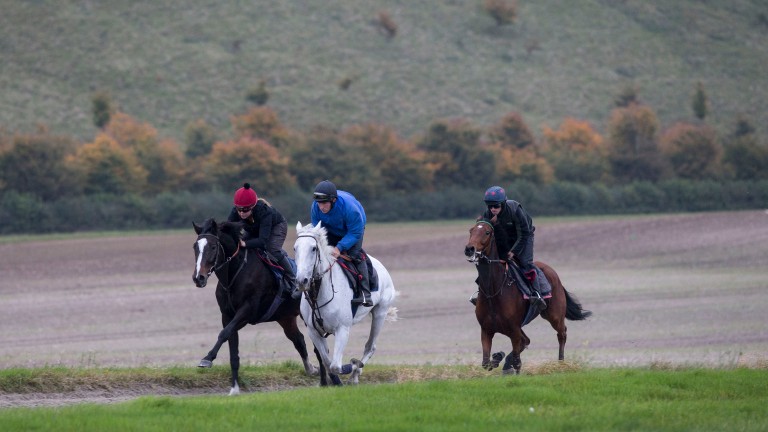 Andrews We went to have a look at him at Barbury and my wife said: “Don’t tell me that’s him.” He wasn’t an impressive-looking horse. Alan started to train him and entered him at Newbury. There was a Nicholls horse who was strongly fancied [Dolatulo, 1-4 favourite]. I couldn’t go and Trish went with a friend. Kingy told them he’d shown him very little at home but he rocked up at Newbury and that was the start of the journey.

King I wasn’t overly happy with him when we started working him. We batted for a bit of time and eventually I said to the owners we had better get him out. We took him to Newbury, which at least was a big, galloping course, but we didn’t have any expectations. He absolutely bolted up by 27 lengths.

Smad Place got a 12-1 quote for the Triumph Hurdle but was beaten next time in the Finale Hurdle at Chepstow and, although he won a novice hurdle at odds of 1-4, he could finish only tenth behind Zarkandar at Cheltenham.

King He was probably never 100 per cent after Newbury, he had a few bad scopes. He ran okay at Cheltenham but not to a top level. We had had issues in the run-up. 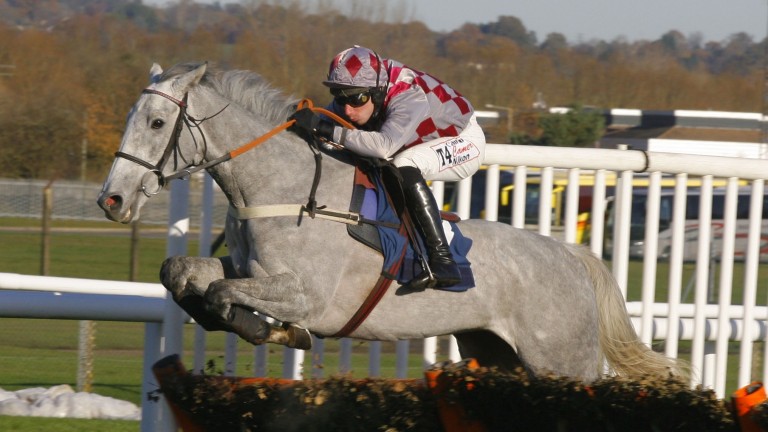 Andrews He was still quite weak in that first season. He’d had a bit of a bug and it was touch and go whether we ran him in the Triumph but we decided we would. We hadn’t held out great hopes because we knew there were stronger horses out there.

TOP-LEVEL BATTLER
Smad Place did not reappear until January the following year when he went to Ascot to tackle the Grade 2 Holloway’s Handicap Hurdle, a race that convinced King to aim for the Ladbrokes World Hurdle.

Andrews It was New Year’s Day at Cheltenham that Kingy, when saddling another horse, said to us: “You’re probably going to think I’ve gone mad but I think we should make an entry in the World Hurdle for him.”

That was franked when he romped up at Ascot. That was a good opening to that season and he went on to finish a creditable third in the World Hurdle. We were thrilled with that because he was still only a young horse and was up against Big Buck’s.

At Aintree Smad Place was in the process of running another huge race against Big Buck’s in the Liverpool Hurdle when he unshipped Choc Thornton. He had shown enough to earn another season’s hurdling before switching to chasing.

Andrews He just stepped at one at Aintree. I guess it was inexperience together with exuberance. Poor old Choc was unseated but would have done well to have stayed on. We were pretty high after the World Hurdle and then back down to earth after that.

He came to us for the summer, then he opened up again at Wetherby. That was probably as poor a run as he’d had. He tried but scoped badly after that. He went on to another Grade 1 at Ascot, where Reve De Sivola beat him. It was really heavy ground and he couldn’t peg him back. Then Solwhit came back and did us twice at Cheltenham and Aintree. But they were good runs. They were championship races and he was getting placed.

That was the end of hurdling. He always looked as though he had the scope for jumping a fence and that is what we went to.

A NEW DISCIPLINE
Smad Place made his chasing debut at Huntingdon in November 2013. At 1-2 he was expected to win and was well on course to do so until blundering at the last fence.

King He was bolting up and had a disagreement with Choc at the last. We took him to Exeter ten days later and that went very well. Things went on from there. He was very impressive at the Newbury February meeting, beating Sam Winner, and then we went to the RSA Chase at Cheltenham.

In the RSA Smad Place came agonisingly close to making his festival breakthrough, leading over the second-last but losing out by a neck to O’Faolains Boy. 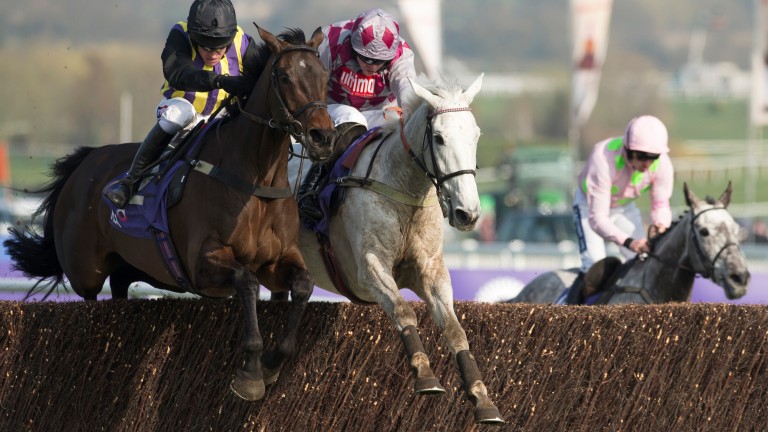 Robert Thornton, jockey It was my most disappointing moment on him. I couldn’t work out how we got beat and I still can’t to this day. He jumped superbly and travelled very well. O’Faolains Boy was the first one off the bridle.

Andrews It was a hell of a finish. We were a nose in front coming over the last and it could have gone either way. The horse tried his best and O’Faolains Boy just mugged him on the line. It was cruel. The horse has been so close in these Grade 1s, I thought that was going to be his day. It was also my birthday.

King He did nothing wrong. You wouldn’t change anything about the race. He just got narrowly beaten. It was still a tremendous performance.

Smad Place has kept to a four-race programme every season and began the last one in the Hennessy, finishing 20 lengths behind Many Clouds in fifth. It was a disappointing start to a campaign in which he failed to win.

King The trainer made a bit of a mess last year in taking him to Newbury without a prep. He ran well but got very tired. I don’t think he was ever the same again that season, although he did finish second to Many Clouds on festival trials day.

Andrews It was my fault. I said to Alan that if we went to the Hennessy we had to go without a prep because if he won a prep race the weights would go up and that would do him. He took the criticism for that but you can put it down to the owners. It was a real tough old race and we felt it bottomed him. He wasn’t quite there for the rest of the season.

Even so, Smad Place’s fourth place in the Betfred Bowl on his final start of the season was the second-best performance of his career on Racing Post Ratings and he returned this month at Kempton, where he defeated Fingal Bay on his first start after a breathing operation.

Andrews He had a trapped epiglottis, which only manifested itself on the gallops. It was a minor operation and he only missed a couple of weeks’ work. We don’t know whether that was affecting him last season. At Kempton he showed real zest and jumped well. Wayne Hutchinson was thrilled with him and it was a good pipe-opener. He certainly looked a stronger horse than he did the year before.

BACK TO THE HENNESSY
King A good summer break, getting a run into him at Kempton and getting his head back in front have all done him the world of good. He’s a better candidate for the Hennessy this time because in hindsight I did the wrong thing in going without a run last year.

I remember taking him to Newbury to work him last year and the ground was so bottomless we only cantered round. We didn’t do a lot with him. Hopefully you learn from your mistakes.

Thornton I’m very hopeful he can win. I’ll be rooting for him and at the same time wishing I was riding him.

Andrews It’s a very tough race. I know it’s a cliche but we just want him to have a good clear round and run up to his best. After that it’s the luck in running. He’s entitled to be there and has a reasonable chance. As always we just want him back safe.

FIRST PUBLISHED 11:53AM, JAN 31 2018
You’re probably going to think I’ve gone mad but I think we should make an entry in the World Hurdle for him