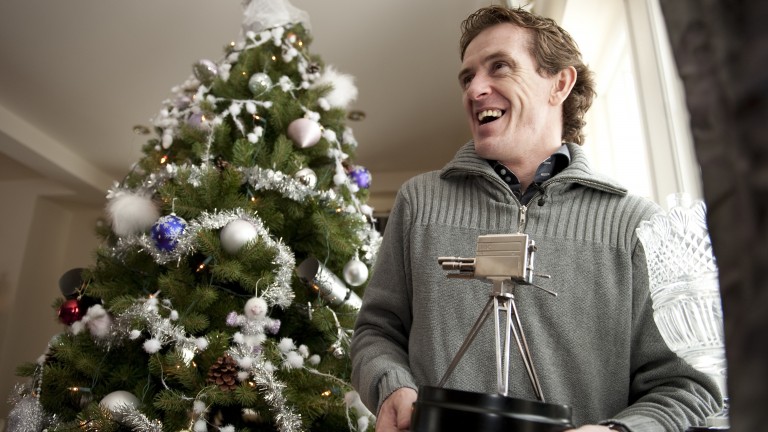 Sir Anthony McCoy at home with his BBC Sports Personality of the Year award
Edward Whitaker
1 of 1
By Andrew Dietz UPDATED 3:26PM, NOV 22 2019

If this was supposed to be our sport's big night, the early signs were far from encouraging. On occasions like these you are always on the lookout for a crumb of comfort, however insignificant, that everything will work out for the best.

For the first couple of hours at Birmingham's LG Arena, there wasn't the slightest inkling the evening would belong to AP.

A quick sighting of Lester Piggott or Sir Peter O'Sullevan would have been just the ticket, but they were nowhere to be seen.

It was freezing outside and while there were plenty of woolly scarves on show, there were none of the Kauto or Denman variety, let alone Imperial Commander. Even a dash of tweed among the many suits would have done.

With curtains-up and time fast approaching, another drink was needed to calm the nerves. Then all of a sudden things were looking up with a first glimpse of Team McCoy.

His fiercest rivals in the saddle were out in force as his supporters, all jockeying for position at the bar. Now, I don't remember European lager and Rioja being part of the McCoy diet, but then last night was no ordinary one.

In contrast, there didn't appear to be a peloton of cyclists or a posse of boxers in such an open show of solidarity for Mark Cavendish or David Haye. Speaking of Haye, rumours circulate the Hayemaker has been knocked out by flu - surely that's one down and eight to go.

On entering the arena, the size of the occasion really hits home. The sellout 13,000 capacity crowd is a factor, but of greater significance is the conveyor belt of sporting greats making their way into the auditorium.

Jonathan Edwards, Damon Hill, Joe Calzaghe, Ryan Giggs – all previous winners of the award – enter to huge cheers, but the decibels increase a notch when Amir Khan and Andrew Flintoff take their seats. You begin to feel grateful none of these stars are in the running this year.

McCoy's entrance is a lot less conspicuous, overshadowed by the close proximity of Phil 'The Power' Taylor, a recognised crowd-pleaser who is definitely in the running. Taylor has laid down a marker.

The McCoy challenge receives a boost as his early profile, second in the programme after Young Sports Personality of the Year winner Tom Daley, has the potential to attract floating voters.

But ever the showman, Taylor pulls out all the stops, half an hour later, as he enters the stage to his adopted tune 'I've Got The Power', pumped to full volume to bring the roaring crowd to its feet for the first time – I'm glad these punters have their phones turned off and won't be able to vote.

Then comedian James Corden, in the guise of Smithy for his Sports Relief interlude, throws his weight behind Taylor saying: "The Power gets my vote – although I do like AP McCoy's steak crisps."

I'm getting fractious and a quick check of the betting on my iPhone does little to allay fears as Taylor's odds crash, though McCoy remains solid at 1-2. Minutes later, the phone lines close and the results are in – has the racing industry's publicity machine done enough? I don't think anyone could argue that any more could have been done.

After all the build-up the awards are dished out in a flash, starting with heptathlete Jessica Ennis in third.

What seems the decisive moment on the night arrives as main danger Taylor is announced as runner-up, leaving McCoy to make history by becoming the first jockey to be crowned Sports Personality of the Year, amassing a staggering 42 per cent of the votes. Never in doubt, hey? After the celebrations, attentions switch to how the new-found stardom will affect AP? A snapshot could be gleaned at the after-party as well-wishers and photograph-hunters fight for a piece of the main attraction.

McCoy seems rather overawed by the attention, but has a glint in his eye as sparkly as his wife Chanelle's dress. His candid style remains undiminished.

"I apologise to all the Racing Post readers who must be sick of the sight of me," he says.

How wrong can a man, who so often gets it right, be?

FIRST PUBLISHED 7:00AM, DEC 18 2017
I apologise to all the Racing Post readers who must be sick of the sight of me