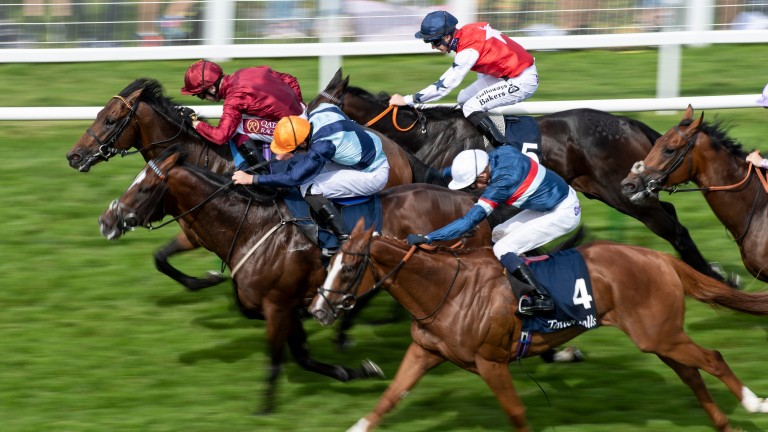 Accidental Agent is ready to break the mould of a typical Group 1 winner and put himself about in the coming months, starting on Saturday when he has three options.

Last year's Queen Anne winner is owned and bred by Gaie Johnson Houghton and trained by her daughter Eve and the family has decided to let the five-year-old entire show off his class in the coming months after his unlucky defeat at Salisbury last week.

His trainer is leaning towards the Sky Bet And Symphony Group Strensall Stakes (1.50), a Group 3 which he is priced up at 8-1 with Paddy Power, a race that opens Saturday's card at York.

Accidental Agent also has the Group 2 Ladbrokes Celebration Mile (2.05) entry at Goodwood later in the afternoon. He is 10-1 with bet365 for that feature on the Sussex Downs.

Later on Saturday evening, the son of Delegator is among the 16 entries for the Dom & Geri Personalised Banners Winter Hill Stakes (6.50) at Windsor.

The team were flummoxed by Accidental Agent's refusal to come out of the stalls as he lined up to defend his Queen Anne win at Royal Ascot in June.

Last week they were left thinking what might have been as Accidental Agent was denied a run until a late rattle failed by just a nose to catch Kick On in the Group 3 Sovereign Stakes at Salisbury.

Regular partner Charlie Bishop said: "I thought we'd won but he takes a long time to get going and he was stopped in his run at a vital stage.

"That was back to near his best, giving them 7lb, and with a clear run he'd have won.

"The plan is to have a bit more fun with him now and hopefully you'll see a bit more of him."

Johnson Houghton confirmed that strategy, adding: "We're going to keep running him. He's in three on Saturday and York is looking most likely, but we'll decide at 9.55 with a last-minute look at the likely runners at declaration time.

"He's back and a wonderful horse to have. We love to have him and want to race him."

'I'd dearly love to win this one' - amateurs keen to shine in Queen Mother's Cup Accidental Agent: the outsider who took on and beat racing elite at Royal Ascot