More than just the bonus races: the tactics behind winning the Ten To Follow

Betting editor Keith Melrose reveals the secrets to the competition 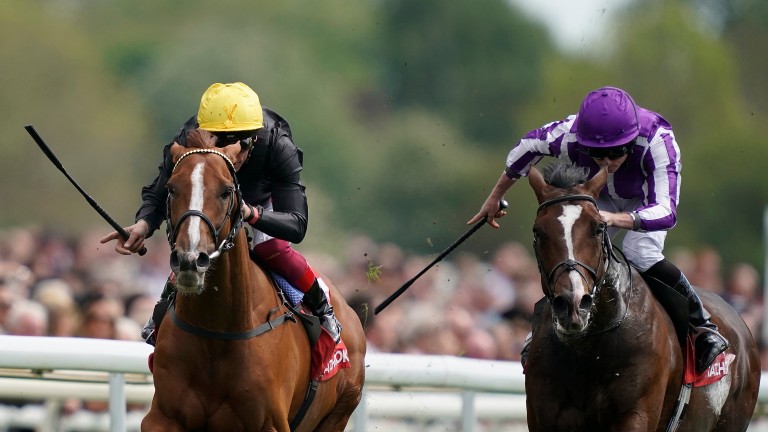 Stradivarius (left): proof that the best selections are not always those that hoover up bonus races
Alan Crowhurst
1 of 1
UPDATED 8:56PM, JUN 1 2020

A lucrative prize awaits whichever lucky punter ends the season in front in the Tote Ten To Follow competition. And, make no mistake, luck plays a significant role, perhaps the single most important one. Most of the lists towards the top of the pile will contain many of the same horses, with the difference made around the edges.

The first thing any experienced Ten To Follow player will tell you is that the bonus races are vital. While that does not need to be followed slavishly, it is largely true. Scooping any of the Group 1s among the bonus races is an immediate 50 points, basically double what you would get for any other race at the top level.

How the bonus races are broken down is an important point to note. There are 25 such races and understanding how they marry up could be vital.

If, for argument's sake, Enable wins the Eclipse, King George, Juddmonte International, Irish Champion Stakes and Arc, it will be next to impossible to win the competition without her on your list. That is 500 points plus her Tote returns (£1 each-way) on all of those races.

Conversely, the Ebor is somewhat marooned on the programme, with no staying races on the list afterwards. Even if you found the Ebor winner at 100-1, you would probably accrue fewer than 200 points and have little recourse for further big lifts.

Ten of the 25 races are Group 1 races over either a mile and a quarter or a mile and a half. You should have two or even three horses that you fancy to win those sorts of races on your list. Be sure to include at least one three-year-old, as the Derby, Irish Derby and Oaks are included and even those that come up a bit short in the Classics might get a second bite at a bonus race in the St Leger. A lack of depth among the older horses means that three-year-olds are an attractive option in the later middle-distance races anyway.

Do not neglect the milers either, especially as this year we will get the benefit of the two Newmarket Classics well in advance of the deadline for submitting your lists. Finding the winner of the St James's Palace or Coronation Stakes should be a priority, given the evidence that will be presented in good time. The older milers are also there to be shot at this year, which opens up the tantalising prospect of copping the lot with a St James's Palace-Sussex-QEII treble.

If it was not already clear from the situation with milers, be in no doubt that this year in particular you need to hold off finalising your list as late as possible. Thanks to the facility that allows you to amend your lists until deadline day, it makes sense to submit a holding list now as placings will be decided on the basis of earliest entries taking precedence in the event of a dead-heat.

While sprinters have roughly equal opportunities to the milers, it is best to play more cautiously with them as nothing tends to dominate this division for long. It would be a valid play in this division more than any other to take a chance on a handicapper who may graduate to Group races. The Stewards' Cup and Ayr Gold Cup are bonus races.

The stayers are the best case study in how it is not entirely wise to focus solely on the bonus races. Pick Stradivarius and there is not realistically another bonus option for him beyond the Gold Cup, but dominance of the division would still bring a healthy points haul: his usual route (Goodwood Cup, Lonsdale Cup, Doncaster Cup, Long Distance Cup) yields 85 points before bringing dividends into it, 135 if he also wins at Royal Ascot.

While emphasis is correctly placed on picking your initial list, at least eight of whom you will be stuck with for the season, the old cliche applies in the Tote Ten To Follow: you cannot win it in the early stages, but you can lose it.

Richard Hutchinson, who won the jumps season edition and with it £177,000, made two changes ahead of Cheltenham. Out went Buveur D'Air and Klassical Dream, in came Epatante and Min. He correctly identified that a Ryanair prospect was missing from his stable.

When it comes to the Flat, the transfer window falls between Goodwood and York. From here, the middle-distance and mile races dominate. Expect to use the transfer window to sharpen your team in this regard. If things are going to plan it may be a good time to thin down your sprinters. If they are not, aim to bring in those you fancy for the Champion Stakes (British and Irish) and the Arc.