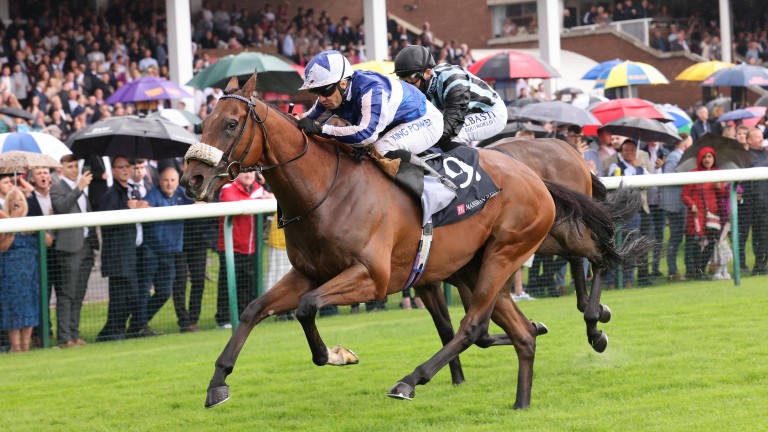 Andrew Balding extended his lead in the British Flat trainers' championship as Foxes Tales won the most valuable race of the day, the £80,000 MansionBet Rose of Lancaster Stakes.

The trainer, who earlier on Saturday landed the £60,000 Sweet Solera Stakes at Newmarket with Majestic Glory, registered his 13th Group success of a memorable year with the King Power Racing three-year-old, who was sent off the 5-4 favourite following the morning withdrawal of Real World.

It was never going to be pretty in testing conditions but Foxes Tales showed a good attitude under Silvestre de Sousa to win for the third time this season.

See the full results of the MansionBet Rose Of Lancaster Stakes

"He must have a lot of ability as I felt he wasn't enjoying that ground," said De Sousa, who had earlier won on King Power's Fantastic Fox.

"He's won on that type of ground before [Golden Gates Stakes at Royal Ascot] but I just felt he wasn't there for me today. He was one of the first off the bridle but he kept finding. He's got a lot to improve mentally and physically."

Speaking away from the track, Balding said: "It was an excellent performance, he toughed it out well. He's in the Champion Stakes at the end of the year, which is a possibility after showing he can handle that kind of ground today. That would be another big step up in class, so we'll find something between now and then."

The jockey executed a plan to perfection with the Roger Varian-trained filly taking up the running two furlongs out to win by three and a quarter lengths.

"She hits a bit of a flat spot racing on a quick surface and the key was to get her out as not a lot is coming off the pace," said Mitchell. "The plan worked out well and her class showed towards the end. We've always thought a lot of her and she's got that black-type win under her belt now." 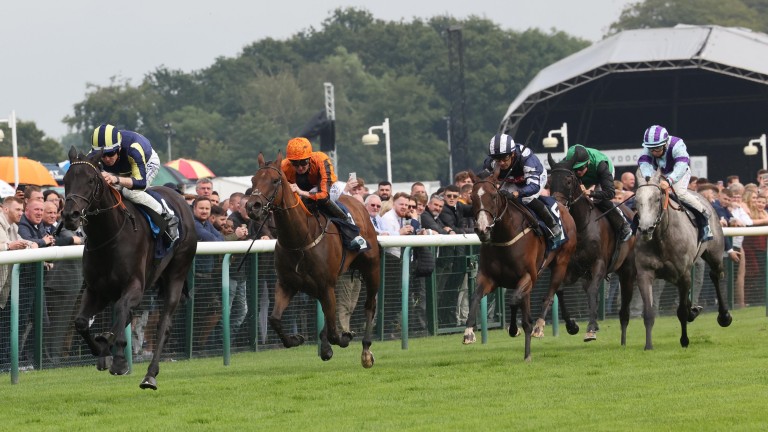 The trainer and jockey, who combined to win the Dick Hern with Realtra in 2015, recorded doubles on the card as Varian also struck with Fantastic Fox, a half-brother to last year's Haydock Sprint Cup winner Dream Of Dreams, while Mitchell was on the mark with Bowland Park for Daniel and Claire Kubler.

Persistent rain contributed to a total of 21 non-runners but it was welcomed by connections of Cold Stare, who racked up a third course win in the 7f handicap.

Trained by David O'Meara for Middleham Park Racing, Cold Stare's previous two victories at Haydock came on soft and heavy ground and everything was in his favour again.

"He loves these conditions, this is where he's at his best and he's ploughed through the ground," said winning jockey Danny Tudhope.

No problems are anticipated for Sunday's fixture at the course, despite the ground turning heavy following 14mm of rain throughout the day.

Clerk of the course Kirkland Tellwright said: "The forecast is not as bad as today and although there are showers about, we should be fine. We're going back to the inner track, which is the trump card really."

FIRST PUBLISHED 6:30PM, AUG 7 2021
He's won on that type of ground before but I just felt he wasn't there for me today. He was one of the first off the bridle but he kept finding