Talk of the Tracks CHELMSFORD 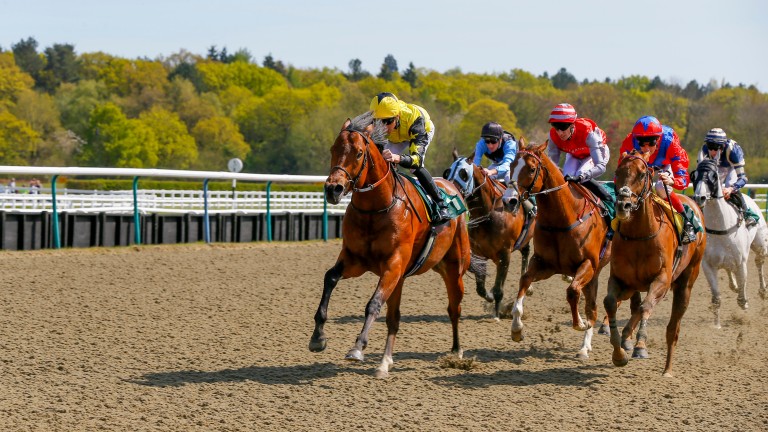 It may have been at a lower grade than some of his more famous successes but Robert Cowell proved once again why he is the sprint king, as Encore d'Or ran out a smart winner of one of the day's two valuable prizes.

For good measure, Cowell also saddled the third-placed Huntsmans Close to claim the lion's share of the £35,000 on offer for the 5f Class 2 handicap.

Favourite Aleef was grabbed late on by 20-1 hope Encore d'Or but the one length winning margin did not do justice to the winner's superiority, with the four-year-old, part-owned by Premier League star Glen Johnson, having tanked into contention under Shane Gray.

"He's got such a high cruising speed and he's extremely talented," said Cowell. "He just needed gelding, which is a shame because if he's as good as we think he could be, he could have been a potential stallion prospect."

Johnson, now plying his trade with Stoke City, made his way to Chelmsford and was thrilled to welcome back his winner.

"I can think of worse ways to spend a Monday," said Johnson, currently involved in the ownership of 12 horses in training.

"I've always enjoyed racing and I've managed to meet a few people and get more involved. We always thought highly of this horse and he's done that more comfortably than it looked, so he's exciting."

Encore d'Or sported first-time cheekpieces, as did Pactolus, who registered a straightforward success in what had looked a competitive affair on paper in the mile Class 2 handicap.

The Stuart Williams-trained gelding, sent off at 6-1, jumped smartly and made almost every yard under Aaron Jones to land the day's other £35,000 pot.

Chevallier made some late headway but was ultimately two and a quarter lengths adrift in second, in a race in which precious few runners truly got involved.

"We didn't plan to make the running but he jumped so well, I didn't want to disappoint him, so we just went steady," said Jones. "He's bowled along nicely and picked up well."

The award for the day's easiest winner was surely bagged by Velvet Revolution, who took apart the 2m handicap field under Martin Harley.

Trained by Marco Botti, Velvet Revolution sauntered to the front and cleared away with Harley motionless to score by five lengths at odds of 9-4 from Aldreth.

"The way he moved was impressive," said Harley, who was completing a double having landed the opening mile nursery aboard Booshbash.

"He has always promised to be a nice horse, so it's nice to see him starting to deliver now."

Hats off to Chelmsford for putting up the not insignificant sum of £115,000 in prize-money and it was good to see it had the desired effect. Although the combined pot was down a little on the corresponding fixture last year, a total of 75 runners still lined up across what was a fine card for a Monday afternoon

FIRST PUBLISHED 6:06PM, NOV 21 2016
He just needed gelding, which is a shame because if he's as good as we think he could be, he could have been a potential stallion prospect