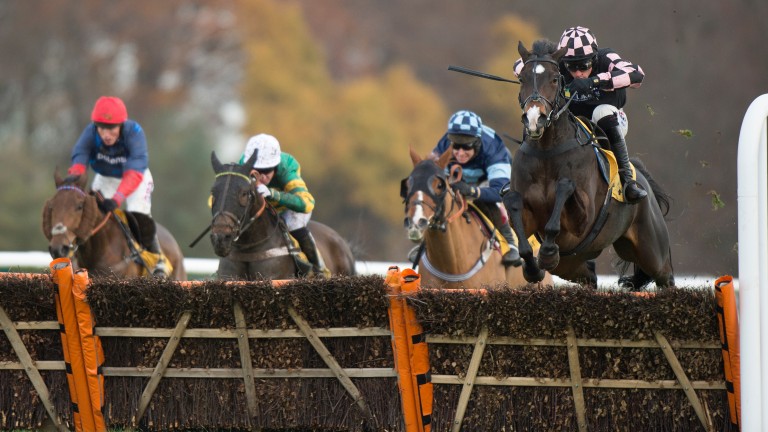 Ch'tibello takes the final flight of the Betfair Price Rush Hurdle with all his rivals behind him
Edward Whitaker
1 of 1
By Lee Mottershead 2:43PM, NOV 19 2016

Six days after the Skeltons won a £100,000 pot with a horse not originally earmarked for the race they repeated the trick, thanks to Ch'tibello coming out on top in a lucrative but muddy six-figure sprint.

At Cheltenham last Sunday, North Hill Harvey captured the Greatwood Hurdle having been scratched from a planned appearance at Wincanton the previous weekend.

This time it was the turn of Ch'tibello, who was pulled out of the Greatwood due to unsuitably soft conditions but won the Betfair Price Rush Hurdle on even more gruelling ground.

The track surface may not have helped last season's Scottish Champion Hurdle winner but nor did it assist 10-11 favourite My Tent Or Yours, a disappointing third after fading inside the closing stages and losing the runner-up spot to rallying front-runner Melodic Rendezvous.

A seasonal reappearance Ascot handicap fifth suggested Grade 1 aspirations for Ch'tibello might have to be tempered, but they have bubbled right back up to the surface, with a trip to Kempton on Boxing Day set to come next for the winning five-year-old, who showed a fine turn of foot under Harry Skelton.

Maybe it can, and if it does, the trainer's brother will almost certainly be doing the steering.

"We were the underdogs and it's nice when this happens," said the rider.

"We weren't sure about the ground but because they went slowly it helped us get the trip on that ground. He's a very fast horse."

Last year's International Hurdle winner Old Guard was the contest's biggest flop in last, one place behind My Tent Or Yours, who moved beautifully for Noel Fehily but found little under pressure.

Fehily said: "He's always been a better horse on better ground and he probably wants a more truly run race. He's jumped well and travelled well but wasn't good enough on the day."