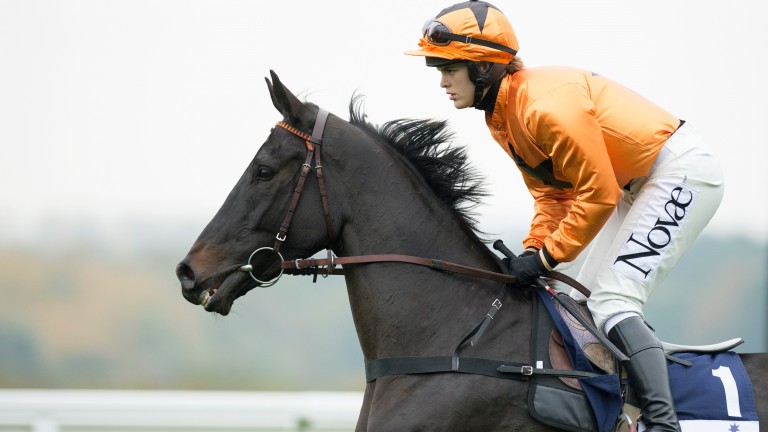 Lizzie Kelly is poised to break down another barrier in both her own career as well as for women in racing when lining up aboard Tea For Two in the Timico Gold Cup at Cheltenham in three weeks' time.

The lure of jump racing's most prestigious prize has proved irresistible to connections of Tea For Two, who had been favourite for Saturday's BetBright Handicap Chase at Kempton but will instead be prepared for the festival feature.

Kelly would become the first woman to ride in the race for 33 years, and only the second ever, and the significance was certainly not lost on her on Thursday.

"This, more than any other 'girl' reference I’ve had in the past, is quite a big thing," she said. "I can see why people are going to be asking me about it, and it's quite big.

"It’s the best race in the calendar and I’ll be riding in it. That’s something I will definitely be proud of."

Tea For Two had been trading as 5-1 market leader for the Betbright Chase and is a rather longer price for the Gold Cup, although at 50-1 would be a more realistic winner than the last horse partnered by a female jockey in the race.

That was 500-1 shot Foxbury, who was pulled up by amateur Linda Sheedy at the 13th when tailed off behind Burrough Hill Lad in 1984.

Kelly became the first woman to partner a Grade 1 winner over obstacles in Britain or Ireland when Tea For Two won the Feltham Novices' Chase at Kempton in December 2015, before the pair broke new ground when finishing just three and a half lengths adrift of Thistlecrack when fourth in the King George 12 months later, Kelly becoming the first female to ride in the Christmas highlight.

Kelly's mother Jane is co-trainer of Tea For Two with Nick Williams, and the eight-year-old carries her colours.

Jane Williams said: "We're going for the Gold Cup. I wanted to go off the back of a win, and he won at Exeter.

"I’m not sure we’ll scare anything off, but that’s where we’re going. If he hadn’t won at Exeter then we'd have gone to Kempton, which he likes, and then perhaps Aintree.

"As it is we've other plans for him next season and can have a go at the Gold Cup this season and see how we get on."

Kelly is set for a busy week during the festival, her participation in the Gold Cup guaranteed to generate plenty of media interest from outside the sport, while she is due to feature as part of the BBC’s radio coverage of Cheltenham on 5 live, having proved a hit in the role since 2015.

'Once in a lifetime'

With Thistlecrack's defection on Tuesday just the latest in a long line of Gold Cup casualties this season, the race does look more winnable this year than it might have been, and Williams added: "You only get a Gold Cup chance once in a lifetime. He's won his race this season and there's always another Betbright.

“Also, had it just gone a bit better we should have been second in the King George. The way it panned out he was a little bit keen, he missed the break and then hurried himself into the race.

"He can be a bit quirky but ran an absolute blinder that day, so why shouldn’t he take his chance? We’re not expecting to win, but why not run? His co-owner Len Jakeman has had a lifetime ambition to have a runner in the Gold Cup and has been in racing a long time."

FIRST PUBLISHED 7:00PM, FEB 23 2017
It’s the best race in the calendar and I’ll be the first woman to ride in it.That’s something I will definitely be proud of