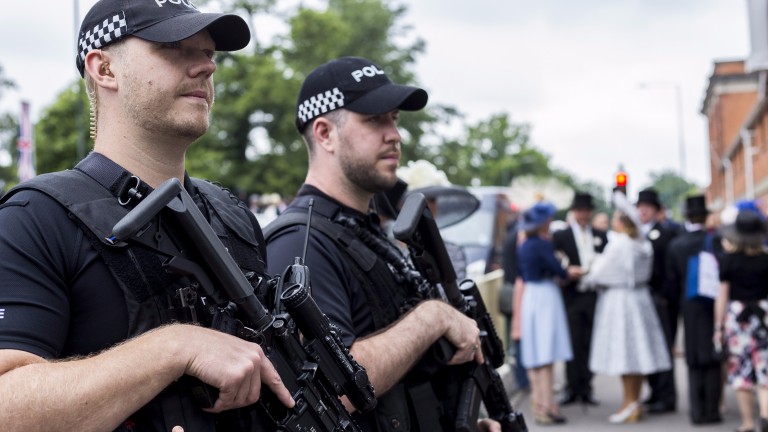 Racegoers attending Royal Ascot next week were warned to expect longer delays getting into the course as a result of extra security measures, including a more visible presence of armed police officers and increased bag searches.

Visiting American trainer Wesley Ward discovered staff were on heightened alert at the track when he was stopped as he walked the course on Tuesday evening before his horses worked the following morning.

Ward said: "I walked the course last night and got stopped by security who said they had snipers on the top there. I had to mention Nick Smith's [Ascot's director of racing] name and it was all good."

Police have been on heightened alert following three terrorist attacks in Britain in the last three months, two in London and one in Manchester.

With the Queen, other members of the royal family and dignitaries in regular attendance at Royal Ascot there has always been an armed presence at the course during the week.

"In the past, security was meant to be subtle but in this day and age people want to see visible insurance you are taking matters that happen around the world seriously."

The number of bag searches will be increased, and Smith added: "We are telling everybody to expect delays, to be patient and understanding.

"People will need to plan to arrive earlier than usual. The searches are not going to be extreme but it will take longer to get on to the course than before."

FIRST PUBLISHED 4:21PM, JUN 14 2017
In the past, security was meant to be subtle but in this day and age people want to see visible insurance you are taking matters seriously

'She has everything you need to win an Arc and is a generous price' Crowds down but enough people to fulfil Ascot's role in government's ERP test 'I didn't say that. He's wrong' - Dettori counters Murphy best-horse claim Stewards' tight call splits opinion, but ultimately the right decision was made A day when two big decisions had to be made - officials at Ascot got both right Time to hail the year of the veteran as experienced riders stay the course again
Bookmaker
Price
E.W. Terms
bet365
Open Account
Ladbrokes
Open Account
William Hill
Open Account
Coral
Open Account
Paddy Power
Open Account
Betfair
Open Account
Sky Bet
Open Account
Sporting
BetVictor
Boylesport
888sport