Stars beaten but Moore has much to look forward to 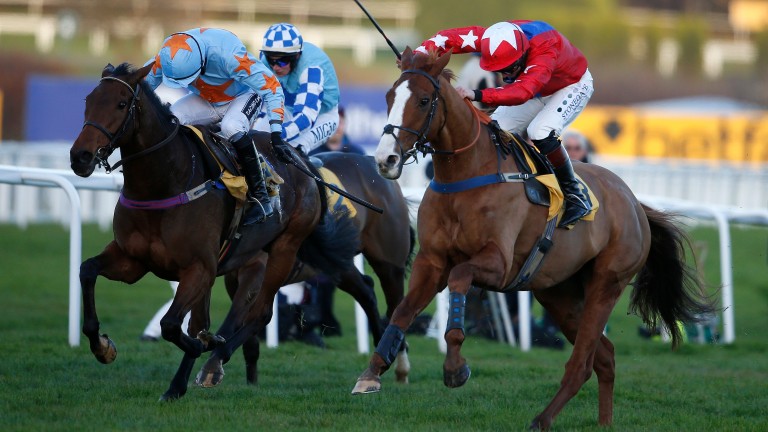 Gary Moore blamed himself for Sire De Grugy's defeat, whereas his son Jamie was more phlegmatic and pointed out that Un De Sceaux had beaten the ten-year-old four times and this was the closest it had ever been.

The whole family could agree on one thing, however. When Sire De Grugy's racing days are over – and possibly long before that – they have a ready-made replacement in Ar Mad, who was stepping out of novice company after a 292 days' absence with a serious injury yet ran an absolute stormer in fourth, beaten barely three lengths.

Moore said: "I'd love to take them all on again with Ar Mad. I thought he ran a great race, but it's blatantly obvious we need to step him up.

"He was just too fresh and well and Ruby was able to take Josh's position after he launched himself at one down the back. He just got a bit too brave, but he stayed on with massive promise."

He added: "I took him out of the King George because I thought I was being stupid, but now I'm slightly regretting it. We could put him back in, but it would cost a fortune."

Josh Moore, who was five from five on Ar Mad previously, said: "He jumped well early but just missed a couple down the back. He did well to recover from them, but I had to mind him for a couple of fences. It was frustrating as otherwise he might have been bang there."

'He looked a little tired'

Returning to Sire De Grugy, who at many stages looked odds-on to become only the second horse to win three Tingle Creeks, the trainer said: "I'm just gutted he got beat, but he's run a great race.

"It was probably my fault for running him two weeks ago at Ascot and taking the edge off him. His record says he can take it, but he's getting older and I thought he looked a little bit tired going up the hill. Fair play to him though, he was possibly just outstayed."

Moore reckons there is "loads to look forward to", and said: "I'll have to go back and speak to the owners, but one could go to Kempton for the Desert Orchid and the other to Ascot for the Clarence House.

"I'll have to try Ar Mad around Cheltenham, as going left-handed is a slight worry, but he was straight as a die today. He'll have options and might be a Ryanair horse."

FIRST PUBLISHED 6:43PM, DEC 3 2016
I'd love to take them all on again with Ar Mad. It's blatantly obvious we need to step him up