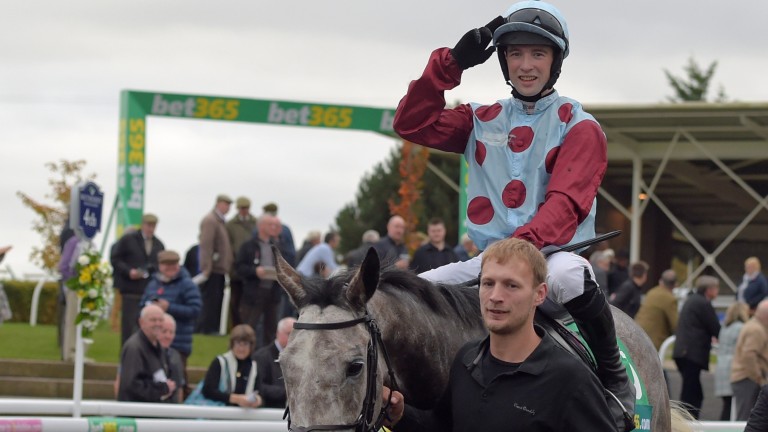 Jonathan Moore salutes the winners' enclosure after his biggest career success in the Charlie Hall Chase
1 of 1
7:11PM, OCT 29 2016

It's days like this you dream about. When Rebecca [Curtis] offered me the job to ride for her I had no hesitation in taking it as she has so many good horses like him to ride.

He's such a genuine horse, I asked him up at the fourth-last and he really came up for me, and I did the same at the third-last and once again he came up. He pinged the last two and gave everything.

This is my biggest day as a rider, it's brilliant. He was my 50th winner as well.

I'm originally from Wexford, my parents always had horses but they weren't really into racing. I'm still living in Ireland, I have a fiance and a five-month-old baby daughter over there and I'm flying back on the 7.30pm from Leeds-Bradford later as I have three rides at Wexford tomorrow.

I fly over when Rebecca needs me and sometimes stay for four or five days.

I was with Noel Meade but last season I claimed on a few for JP [McManus] and I rode At Fishers Cross for him and Rebecca in the handicap hurdle at Aintree, and then I won on Irish Cavalier for her at Punchestown.

Although he is by Aussie Rules, Irish Cavalier is a stayer; last time it was too short for him at Chepstow. He's a really progressive horse and I'm looking forward to riding him in the big races later on this season.