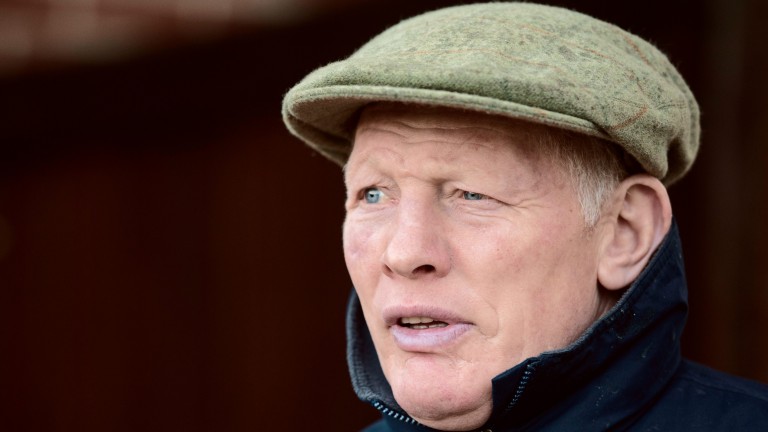 Gary Moore: has a rare runner in the shape of Britanio Bello at Bangor
Edward Whitaker
1 of 1
By David Milnes 8:04AM, JAN 3 2017

Gary Moore has just his second runner at the track in the last five years in the shape of Britanio Bello who is on a recovery mission after flopping on his chasing debut at Lingfield last month.

The six-year old has a big act to follow as his trainer's last runner at the venue, Leo Luna, was a winner over hurdles in 2013.

Prior to that mishap on his first outing of the season, Britanio Bello had looked on the upgrade when scoring handsomely over hurdles at Ludlow at the end of the last campaign.

Of the eight runners, two are tackling fences for the first time including Truckers Glory who is out to continue Rebecca Curtis's bright start to 2017 following her success with Shantou Flyer in a Grade 3 Chase at Cheltenham on New Year's Day..

Truckers Glory has experience of bigger obstacles having competed in Irish point-to-points in his younger days, although fellow fencing debutant Vinegar Hill failed to complete in his two outings in similar company.

Vinegar Hill, Britanio Bello, Truckers Glory and On The Road were all beaten favourites last time.

Donald McCain, trainer of Clondaw Draft
He's had his problems which is why he's been off for so long but he's ready to start back. He would probably prefer better ground but we have to start somewhere.

Jonjo O'Neill, trainer of Benzel
He's in good old form with himself at home but has been a bit disappointing on the track the last couple of times and we are just hoping he can recapture some of his form from the summer.

Stuart Edmunds, trainer of Vinegar Hill
It's his first time over fences but he's schooled very well at home. The 0-135 hurdle he ran in last time may have been a bit grand for him and this should be more his level. He'll probably be better served by three miles but there are very few novice handicaps at that trip just now.

Gary Moore, trainer of Britanio Bello
I thought he was a certainty when we sent him to Lingfield for his debut over fences but he hit one hard and that knocked the stuffing out of him. He's schooled well since and we've always thought this sort of trip would suit him. We don't have many runners at the track but there are so few of this type of race around.

Evan Williams, trainer of On The Road
He's only won a couple of moderate races over hurdles and was beaten in a poor race first time over fences at Sedgefield. It looks competitive and any prize-money would be most welcome.

FIRST PUBLISHED 6:00PM, JAN 2 2017
I thought he was a certainty when we sent him to Lingfield for his debut over fences but he hit one hard and that knocked the stuffing out of him